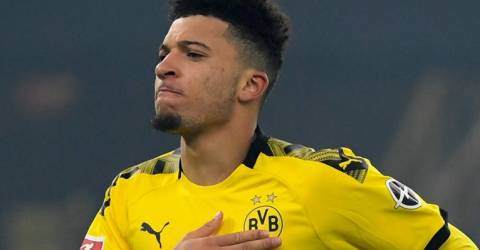 “It’s a big loss for us, especially given the form Jadon has been in recently,” said Zorc, with a nod to Sancho’s three goals in his last three games.

Though the club have not said how long he will be out of action, Kicker reported he is expected to stay sidelined “beyond Tuesday’s game”.

With a 3-2 advantage from the first leg, Dortmund are hoping to qualify for the Champions League quarterfinals for the first time since 2017 when they host Sevilla on Tuesday.

They will have to bounce back from Saturday’s defeat to Bayern, in which they threw away an early 2-0 lead to lose 4-2 in Sancho’s absence.

Bayern defender Jerome Boateng limped off the field after twisting his knee during the second half, but the club said the blow was less serious than initially feared.

“Jerome Boateng suffered a strained left knee capsule… the diagnosis was made following an examination by the FC Bayern medical department,” Bayern said in a statement.

They added that the centreback had been given the “all-clear” and would complete “an individual rehabilitation programme” in the coming days. – AFP