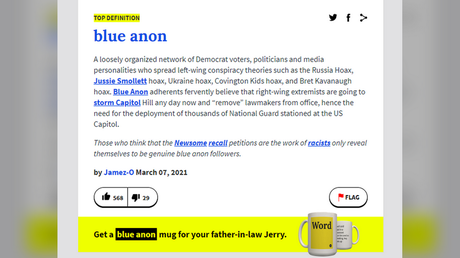 Conservatives are celebrating a culture war victory after “Blue Anon,” the embarrassing new branding of left-wing conspiracy theorists that plays on the ‘QAnon’ smears used by the media, was restored to the Urban Dictionary.

The term and its crowdsourced definition were put back in the Urban Dictionary on Monday, after being disappeared over the weekend. The updated definition begins with calling Blue Anon “a loosely organized network of Democrat voters, politicians and media personalities who spread left-wing conspiracy theories, such as the Russia Hoax, Jussie Smollett hoax, Ukraine hoax, Covington kids hoax and Brett Kavanaugh hoax.”

CULTURE WAR VICTORY: Urban Dictionary restores ‘Blue Anon’ entry after backlash to censorshipConservatives take the win on this one https://t.co/Y4VbtwgrLH

Journalist Jack Posobiec, who has promoted the Blue Anon term, was similarly celebratory: “Ladies and gentlemen, we did it.”

The definition seems to have originated in a Twitter thread started in early February by author Max Nordau. Suggested Blue Anon theories included such allegations as: ‘police collaborated with rioters in the US Capitol attack on January 6’; ‘Supreme Court Justice Brett Kavanaugh is a gang rapist’; ‘former First Lady Melania Trump has a body double’; ‘Stacy Abrams won the 2018 gubernatorial election in Georgia’, which by the way isn’t an incitement to insurrection; ‘the 2004 presidential election was rigged’ (also not an incitement); ‘Russia paid bounties for killing of US soldiers in Afghanistan’; and ‘US border agents told detained migrants to drink from toilets if they’re thirsty.’

Urban Dictionary had removed the entry for ‘Blue Anon’ despite the fact that the site typically doesn’t ban terms for offensiveness. For instance, several anti-conservative terms, including “Republic*nt,” have remained in the slang dictionary unscathed.


While Urban Dictionary may have reverted the censorship, the term ‘Blue Anon’ apparently doesn’t exist in the eyes of the world’s largest online search engine. Google searches for the term mostly return links to skiing goggles and snowboarding equipment. That’s not the case on other search services, such as those offered by DuckDuckGo and Bing, which seem to return relevant answers.