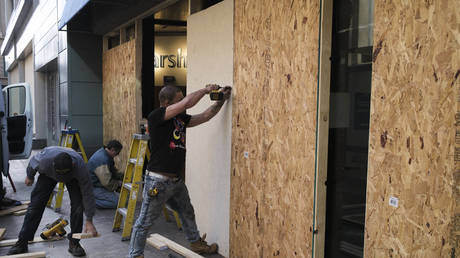 Authorities in Minneapolis have erected steel fencing, barbed wire and concrete barricades outside the city’s courthouse and local police stations ahead of the Derek Chauvin trial, set to begin Monday.

The former police officer will stand trial for the May 25 killing of George Floyd in an incident which rocked the US to its core and triggered months of unrest and billions of dollar’s worth of damage.

An estimated 15 million to 26 million people participated in Black Lives Matter protests in the US in the aftermath of Floyd’s death.

Armored personnel carriers have been deployed and local Minneapolis police stations have all been fortified in anticipation of further protests as Chauvin’s trial is set to commence with jury selection. The proceedings are expected to last two months, and preparations for the trial have been ongoing for the past seven months.


The stated aims of the operation are the prevention of crime and damage to property and the protection of the First Amendment right to protest and peaceful assembly.

Minneapolis City Council President Lisa Binder claimed that  “law enforcement escalated” the violence last summer and “created the conditions for folks to come from outside our community to cause more harm.”

“I don’t think that we can police ourselves out of police violence,” she added.

Ben Crump, an attorney who represents the Floyd family, cited one report by the US Crisis Project, which found that 95 percent of the roughly 10,600 Black Lives Matter protests between Floyd’s death in late May and August 22 were peaceful.

“This will be a referendum on whether police are held accountable for killing black people in America in 2021,” Crump said, adding that the Floyd family expects Chauvin to be convicted of “torturing George Floyd to death.”

However, according to a report by the City Assessor’s Office, the estimated damage caused by the unrest in Minneapolis alone is between $250 million and $350 million.

Meanwhile, a report by Verisk Property Claims Service issued in November estimated the total cost of the national unrest in the wake of George Floyd’s death as surpassing $2 billion, the most since such records began.

For context, the PCS estimates the insured losses caused by the Rodney King riots in 1992 at $775 million.