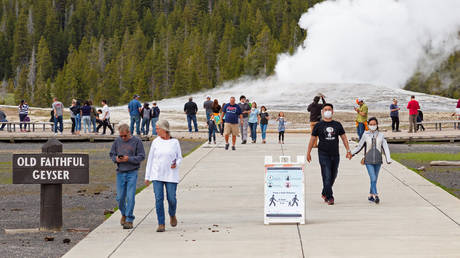 Wyoming became the latest state to ease its Covid-19 rules in defiance of the Biden administration’s guidelines, as Governor Mark Gordon announced that his mask mandate and restrictions on businesses are ending.

Effective on March 16, bars, restaurants, theaters and gyms will be allowed to resume normal operations, and the statewide mask mandate will end, Gordon said on Monday in a statement. Masks will continue to be required in schools, and residents are encouraged to keep wearing face coverings in indoor public spaces.

“Wyoming is one of the few states in the country that kept students learning in the classroom for the entire school year,” Gordon said. “We made sacrifices, but the earlier orders saved lives. We persevered.” Keeping the mask requirement in place for schools will allow students – who won’t have the opportunity to be vaccinated this spring – to have proms, graduations and other normal end-of-year activities, he added.


Gordon cited declines in Covid-19 cases and hospitalizations as well as the relatively rapid vaccine rollout as the reason behind the move. About 19 percent of the state’s residents have received at least one vaccine shot.

Gordon followed other Republican governors in rolling back Covid-19 restrictions.

Governors in Texas and Mississippi last week ended their mask mandates. Iowa and Montana did the same in early February.

President Joe Biden blasted last week’s round of mask reprieves, saying, “The last thing we need is Neanderthal thinking.” Biden came into office in January asking that Americans “mask up” for 100 days to help blunt the spread of Covid-19. He said last fall that because a nationwide mandate might not be legally enforceable, he would personally pressure governors and local officials to order compulsory face coverings.