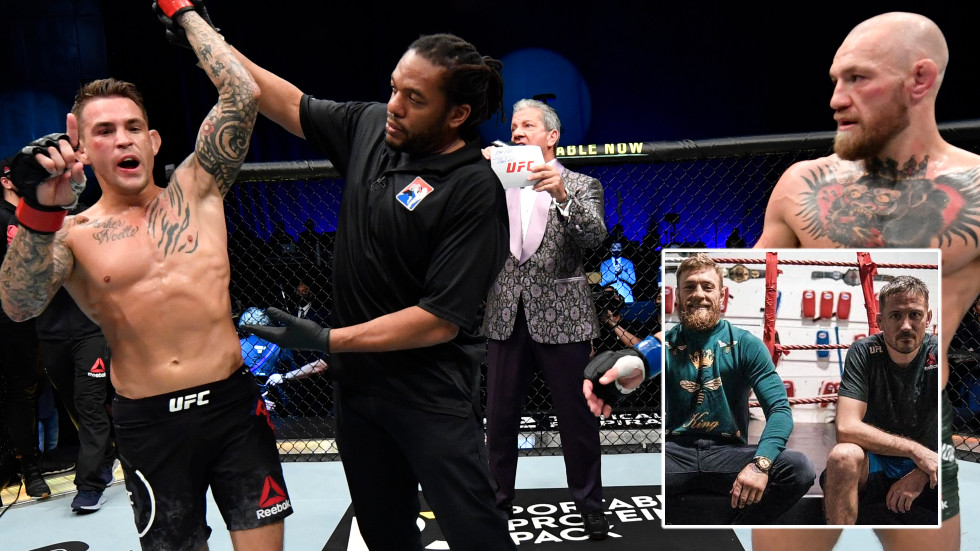 Conor McGregor’s longtime coach, John Kavanagh, says that his fighter will have a change of approach for his mooted rematch with Dustin Poirier this summer and will adopt a more varied skillset rather than a boxing-only approach.

McGregor entered January’s showdown with former foe Poirier as a confident man. Much of his preparation for the fight took place under the tutelage of Phil Sutcliffe, the former Olympian turned head coach of the famous Crumlin Boxing Club in Dublin where Poirer was considered a stepping stone – some handy preparation against another southpaw – ahead of the real prize: a money-grabbing fight against Manny Pacquiao.

Prizefighting, though, has a habit of punishing those who try to pull back the curtain and peek too far into the future. McGregor, all confidence and pomp ahead of the fight, was flummoxed by Poirier’s use of a calf-kick, with each one robbing a little more of the Irishman’s mobility before the American sat him down on the canvas with a succession of strikes midway through the second round.

They say that it is hard for fighters to retain their motivation when they wake up in silk sheets, but they’re a hell of a place to return to if you need to lick your wounds – and the recent sale of his share in his whiskey brand, Proper No. Twelve, means that McGregor can afford a few more comforts.

Also on rt.com
McGregor and Poirier ‘agree’ to another rematch – but is the UFC’s pursuit of big-money bouts undermining the sport?


“He is in great spirits – well, he actually sold the spirits, so he is in really good financial spirits,” Kavanagh said of McGregor to BT Sport. “He is just looking forward. I’m hoping we can get that rematch done in the summer.

“We wanna get that one back, gotta figure out these fricking calf kicks, how to use them and defend them.

“We’re pretty confident we have that sorted out now. He looked excellent everywhere else. Give us a rematch and we have the rematch, I feel.”

As for those pesky kicks, Kavanagh says that the success of them made him re-evaluate the approach they entered the fight with. McGregor was having success with his boxing but the stance he employed – heavy on the front foot as he pushed forward – left him wide open to Poirier’s technique of choice.

Even Kavanagh says that he was surprised by how effective the calf kicks turned out to be.

“It definitely has an effect. Would it have had enough of an effect to change that fight? I don’t think so. Fair play to Dustin and Mike [Brown] and the guys,” Kavanagh continued.

“Even when he was getting clocked, he got hit a couple of times hard but he still didn’t start getting into a trading war or try and gas himself out trying for takedowns.

“He had this plan – that he had the check hook and they had had the calf kick and they were just going to keep doing it and hope it would work – and it did.


“We have to fix that technical detail, which us not like having to fix everything, it’s fixing a small enough area. Get that back into the whole game, not going in with a sort of with a boxing mentality. Going in with an MMA mentality.”

For now, Kavanagh says he is intent on showcasing the Conor McGregor who has created history so many times in mixed martial arts: the man who ended Jose Aldo’s decade-long unbeaten streak in 13 seconds, or the fighter who bullied Eddie Alvarez out of the UFC lightweight title.

“Conor was always famous for his movement, his ability to change stances – his bounce, as he would say. We got to bring that back,” Kavanagh explained.

“It’s there, it’s under the hood, it’s not skills that have to be learned or relearned. They just have to be reignited.

“We have already started that process. So wouldn’t it be great to do it again in the summer, maybe in Vegas in front of 20,000 screaming people, if we can get the world back open again?”

Also on rt.com
‘I have a lot of messages’: UFC fighter Maryna ‘Iron Lady‘ Moroz sprawls in bikini on sports car bonnet as she unveils ‘hot’ site