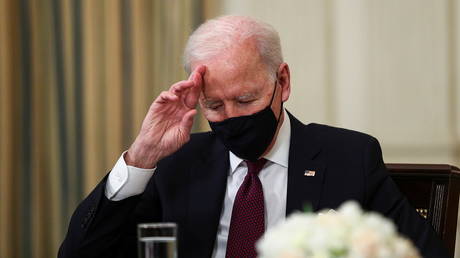 As President Joe Biden faces scrutiny over his lack of press conferences, and questions about his mental and physical health from the public, the Hill’s Sharyl Attkisson has suggested a solution: use a hologram!

“Maybe a Biden hologram can handle his public speeches,” she wrote in her Wednesday opinion piece.

Attkisson acknowledges a recent public poll that found half of Americans are questioning whether Biden is physically and mentally up to the task of the presidency, and that over half are concerned about his lack of press conferences – he will reportedly host one before the end of the month. She says “officials in the administration” have told her they are “mulling far-fetched speculation that, upon further examination, starts to look almost like it is not completely outside the realm of the possible.”


This “far-fetched speculation” refers to possibly using a hologram of the president, which Attkisson argues is completely possible, thanks to modern artificial intelligence and deepfake technology, all of which she says officials have told her are already being “researched or accomplished in the secret channels of our government.”

“Joe Biden isn’t a hologram. But if he wanted to be, and if powerful people with access to the latest technology wanted to make him one, it seems as though there might be little they couldn’t accomplish,” she wrote.


Biden has not only not held a single press conference since entering the White House, but also skipped out on an address to Congress in February. White House Chief of Staff Ron Klain has said the joint address could happen once the president signs the most recent Covid-19 relief package.

“I think, shortly after that, you will see him work with Congress on a joint address that is appropriate for Covid and all of these other times we are living in,” Klain told Punchbowl News this week.

Questioned about Biden’s lack of interaction with the press on Tuesday, White House Press Secretary Jen Psaki touted his “more than 40 Q&As” since becoming president, though she admitted she doesn’t know whether Biden-hosted press conferences will become a regularly scheduled event. Even during public appearances, Biden has often avoided any direct questions from the press.

Also on rt.com
Joe HIDDEN: POTUS avoids even the friendly media as Americans get cat, dog and portrait distractions instead


He is to hold a primetime address on Thursday to speak about the pandemic. “The president will deliver his first primetime address to commemorate the one-year anniversary of the Covid-19 shutdown … He will discuss the many sacrifices the American people have made over the last year, and the grave loss communities and families across the country have suffered,” Psaki announced on Monday.