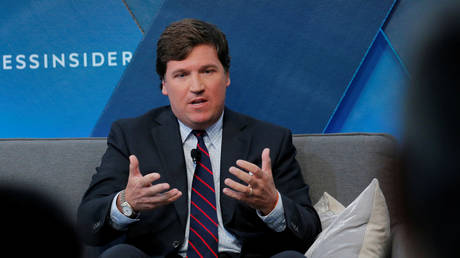 The New York Times’ Taylor Lorenz blasted Fox News’ Tucker Carlson for airing a segment that featured a widely-available picture of her face, insinuating it was part of the harassment she claims has “destroyed” her life.

Lorenz earned widespread attention – and criticism – this week after saying she deals with “deep trauma” stemming from “online harassment.”

“It’s not an exaggeration to say that the harassment and smear campaign I’ve had to endure over the past year has destroyed my life. No one should have to go through this,” she tweeted on Monday, in commemoration of International Women’s Day.

Her complaint prompted Carlson to target the prominent Times’ journalist on his Tuesday show. He grouped her with other high-profile women, including Hillary Clinton and Meghan Markle, lambasting them for publicly whining about their hardships when, in reality, they have some of “the best lives in the country.”

Lorenz responded to Carlson on Thursday and seemed to suggest his segment was part of the “harassment” that has destroyed her life, blasting the host for finding and using a picture of her, and calling it “very weird” and “intentional.”

Yup, and the photo they used isn’t even from my IG, it’s from years ago. Tucker spent time and resources to photoshop my avatar into something it isn’t. That’s very much an intentional act! https://t.co/T9meoPH4Ua

While Lorenz does not use an image of herself in her Twitter profile, the picture shown by Carlson is widely available, including on the Times’ website.

Taylor Lorenz is accusing Tucker of harassment for using her picture instead of her blobfish avatar. Looks like her employer is involved in the same targeted harassment. Scandal!Trust fund journos like Taylor work overtime to convince ppl they are victims. They’re just clowns pic.twitter.com/1xMHHVIo33

Ironically, Lorenz herself has earned a reputation for what some would call harassment. Last month, the tech and web culture reporter publicly claimed entrepreneur Marc Andreessen had used derogatory language during a discussion on the social media app Clubhouse and that “not one other person in the room called him on it.”

Andreessen faced a quick onslaught of criticism on social media, but multiple people refuted Lorenz’s claim and she later deleted the tweet and said she “regretted” her error, though she offered no apology.


Writer Mason Hartman has also accused Lorenz of targeting her and accusing her of being a “racist nutcase” without any proof.

At one point, she even falsely claimed that I had photoshopped a screenshot that I had taken of a man making a fairly horrifying comment about me. Once she realized that several other people had seen the tweet I had screencapped, she deleted the accusation and disappeared.

Lorenz’s own history hasn’t earned her much sympathy over her “online harassment” claims or her suggestion that Carlson is somehow sending “intentional” signals to his audience to harass her by showing an image of her.

Federalist editor Mollie Hemingway called Lorenz a “bully” and a “malicious doxxer,” possibly referring to Lorenz’s exposing of conservative activist Pamela Geller’s social-media-famous daughters, who had tried to conceal their connection to her, in 2018.

This AP employee argues that Taylor Lorenz — a bully/’reporter’/malicious doxxer at NYT (one of the most powerful and destructive media organizations on earth) –should be given special protection in a way other citizens aren’t from public response to her public claims. https://t.co/E1qwZdRKTc

I love the newly invented standard that we can’t criticize reporters or even mention their names, and we’re expected to just adopt this new standard because they want us, to but I have a better idea and that’s that they can kiss my ass. Taylor Lorenz Taylor Lorenz x 1000 https://t.co/Ts4OZC2Z5I

. @TaylorLorenz wants to write for the public – but doesn’t want the public to respond. It’s the height of wokeness wrapped in elitism. The fragility of today’s reporters stands in stark contrast to real journalists of the past. https://t.co/o8BzJuvGHp


“Taylor Lorenz is a star reporter with the most influential newspaper in the US, arguably the west. Her work regularly appears on its front page,” journalist Glenn Greenwald previously tweeted about Lorenz, in a thread blasting her harassment claims. “Her attempt to claim this level of victimhood is revolting: she should try to find out what real persecution of journalists entails.”

Taylor Lorenz is a star reporter with the most influential newspaper in the US, arguably the west. Her work regularly appears on its front page. Her attempt to claim this level of victimhood is revolting: she should try to find out what real persecution of journalists entails. pic.twitter.com/ZV0lm9CIqh