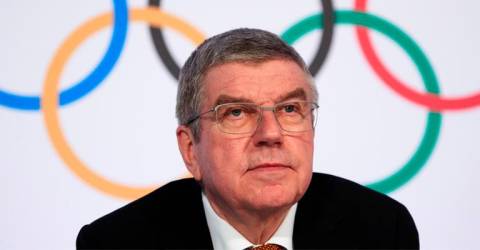 LAUSANNE: International Olympic Committee president Thomas Bach (pix) promised to deliver a “safe, secure” Tokyo Olympics this year as he prepared to be re-elected for a second term on Wednesday.

As he opened the IOC Session, Bach said it was no longer a question of whether the Olympics, which were postponed last year as the coronavirus pandemic spread around the globe, would take place but in what conditions they will be held.

“Tokyo remains the best prepared Olympic city ever and at this moment, we have no reason to doubt that the Opening Ceremony will take place on July 23,” Bach said.

“The IOC is working at full speed together with our Japanese partners and friends to make the postponed Olympic Games a safe manifestation of peace, solidarity and resilience of humankind in overcoming the pandemic.”

Bach said his aim was to create “a safe, secure and fair environment for all the athletes”.

The local Japanese organisers are due to announce by the end of the month whether foreign spectators will be allowed to attend the Games, although it is widely reported that they will be barred due to Covid-19 concerns.

Bach, a 67-year-old German lawyer who won a gold medal in fencing at the 1976 Montreal Olympics, is unopposed in the election.

The Tokyo Olympics is the most pressing agenda item at the start of his new four-year term, after an opening eight years that saw him deal with the problem-laden 2014 Sochi and 2016 Rio Games, state-sponsored Russian doping and the deadly wave of coronavirus.

The term of office of the IOC president has been halved from eight years to four since Bach took office in 2013. – AFP