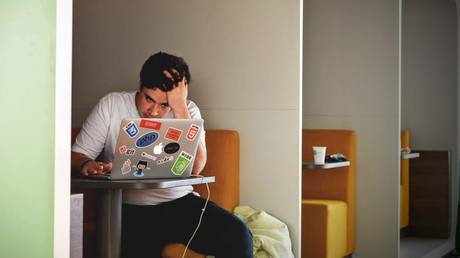 A year of living through Covid has left many Americans drinking more, struggling with their weight and sleeping less – and parents, key workers, the young, and people of color are feeling the stress more.

The findings are detailed in a survey released on Thursday by the American Psychological Association (APA), which finds that Americans have been through a collective trauma that will adversely affect their physical and mental health for years to come.

The APA reported that 61% of Americans have experienced undesired changes in their weight since the pandemic started, gaining more than 13kg on average – 10% reported gaining more than 22kg – and the association has warned that weight changes bring significant health risks. The study also found 18% of Americans reported losing weight because of pandemic-induced stress, losing nearly 12kg on average.

Also on rt.com
‘No data, no evidence’: Fauci admits CDC advising against air travel for vaccinated Americans a ‘judgement call’


Some 23% of Americans reported that they had been drinking more alcohol to relieve Covid stresses.

“We’ve been concerned throughout this pandemic about the level of prolonged stress, exacerbated by the grief, trauma and isolation that Americans are experiencing,” said Arthur C. Evans Jr, the CEO of the APA. “This survey reveals a secondary crisis that is likely to have persistent, serious mental and physical health consequences for years to come.”

Two in three adults in the US said they had been sleeping either more or less since the pandemic started.

Parents of children under 18 are feeling the stress more. Nearly half (48%) of fathers reported drinking more, and 55% reported weight gain.

Also on rt.com
GOP senator ridiculed for taking credit for provision of Covid-19 relief bill he did NOT vote for, says he’s ‘entirely consistent’


Nearly half (47%) of mothers who are home-schooling children said their mental health had worsened, with slightly more than three in 10 adults overall (31%) experiencing a decline.

The APA reported that essential workers were more than twice as likely as non-essential ones to have received treatment from a mental health professional (34%, compared to 12%) and to have been diagnosed with a mental health disorder since the coronavirus pandemic started.

More than half of black Americans (57%) said they felt uneasy about adjusting to in-person interactions once the pandemic ends, compared to 51% of Asians, 50% of Hispanics, and 47% of white people.


Gen Z adults (46%) were the most likely generation to say that their mental health had worsened compared with before the pandemic, followed by Xers (33%), Millennials (31%), Boomers (28%) and older adults (9%).

In all, the APA survey looked at responses from more than 3,000 English- and Spanish-speaking American adults.