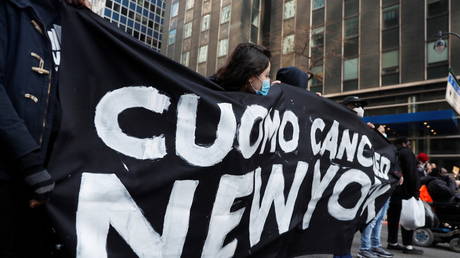 In what appears to be the most far-reaching and detailed accusation of sexual harassment facing New York Governor Andrew Cuomo, his aide said he groped her at the governnor’s mansion.

The woman, whose name was not revealed, but who is a member of the embattled governor’s Executive Chamber staff, reportedly said that Cuomo invited her to his official residence under the pretext of sorting out some minor technical issue with his phone. After the staffer, who according to a Times Union report, is “much younger” than Cuomo, found herself alone with the governor, he closed the door and sexually harassed her.

The staffer said she told Cuomo to stop as he reached under her blouse and groped her.

Also on rt.com
Tara Reade: Women like me should not have to gather in armies to be heard


The accuser, whose account was relayed by a source privy to the ongoing investigation into the governor, claimed that the alleged episode late last year was not the only time when Cuomo touched her or made unwanted advances.

Becoming Cuomo’s sixth accuser, the aide came forward earlier this week. She reportedly decided to break her silence after she saw Cuomo denying that he had ever inappropriately touched women at a press conference earlier this month – shortly after his first accuser, former staffer Lindsey Boylan, claimed he kissed her without consent and propositioned her with a game of “strip poker” on a private plane.

While Cuomo has previously downplayed the snowballing accusations, suggesting his “playful” comments were misinterpreted as flirtation, he has not outright denied touching women, but insisted he had never done so in a way that he deemed “inappropriate.”

Responding to the fresh claim of sexual harassment, Cuomo doubled down on his assertion that he would never sexually touch a woman without her consent.

“I have never done anything like this,” Cuomo told The Times Union on Wednesday, calling the details of the woman’s account “gut-wrenching.”

Cuomo has come under increased pressure to resign as accusations of sexual harassment, the first of which came to light last December, began piling up. The calls for the governor to step down have come from both Republicans and Democrats, including New York State Senate Majority Leader Andrea Stewart-Cousins (D) and Assemblyman Carl Heastie (D). However, the embattled governor has refused to bow to the pressure, arguing that it would be “undemocratic” despite calling for New York’s then-attorney general, Eric Schneiderman, to step down after similar accusations were made against him in a New Yorker magazine piece in 2018.


Cuomo’s combative stance has found support among two dozen female Democratic lawmakers, who penned a letter arguing that his resignation would undermine the investigation by New York AG Letitia James.

In addition to the unravelling sexual harassment scandal, Cuomo is facing fallout after his administration underreported nursing homes death amid the Covid-19 pandemic. He has become a subject of a preliminary FBI investigation after his office admitted to hiding the real data to escape criticism by the Trump administration.