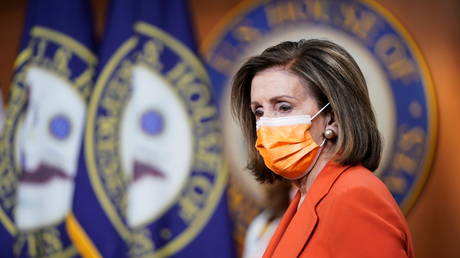 Speaker of the House Nancy Pelosi (D-California) came to President Joe Biden’s defense as a surge of unaccompanied minors have reached the border and the administration has been accused of not being able to handle the situation.

“I trust the Biden administration’s policy to be based on humanitarian and love of children rather than political points or red meat for their – for their Republican base,” Pelosi said at a Thursday press conference.

Comparing Biden’s administration favorably to Trump’s when it comes to border policy was a point she hit multiple times, and one that has been echoed by White House officials as they have been questioned about the surge at the border.


“I think the difference between this administration and [the] one before is great in terms of how we meet the needs of these children, placing them as much as possible with family, but in other safe homes and in the meantime, to have a humanitarian reception for them wherever they are,” the congresswoman said.

Nearly 30,000 minors crossed the border unaccompanied during the month of February, which was a five-fold increase over January, which itself saw a slight uptick from December.

Pelosi accused the Trump administration of having a policy that “snatched” babies “from the arms of their parents.”

The congresswoman said Republicans’ focus on immigration at the moment is because “their Dr. Seuss approach didn’t work,” referring to outrage among conservatives after several Dr. Seuss books were taken out of circulation over alleged offensive imagery.


Biden has relaxed Trump’s more stringent border policies, which many critics have claimed has led to the current surge at the border. Reports have indicated officials have struggled to find facilities to house the onslaught of migrants in, and some who have been detained have been released even after testing positive for Covid-19.

White House officials have refused to refer to the situation as a “crisis” and put much of the blame on the previous administration.

Roberta Jacobson, Biden’s border czar, said during a Wednesday press conference that the surge may be attributed to a “pent up demand” created by the Trump administration’s strict border policies and a “more humane policy” may be driving more people to make the “decision” to cross.