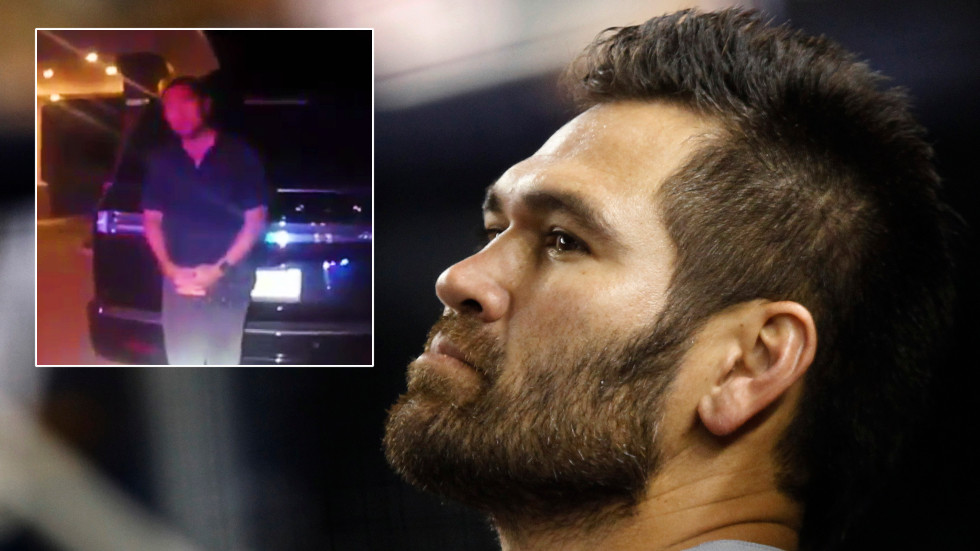 Body-cam footage used by cops who pulled over Johnny Damon in a drink-driving scandal has shown the ex-Major League Baseball star slurringly accusing officers of pulling him over because of his outspoken support for Donald Trump.

Disgraced Damon appeared to tell police that his wife, Michelle Mangan-Damon, who pointed out a “Blue Lives Matter” slogan on their car in the recording, was routinely violent when he was pulled over last month on suspicion of driving under the influence.

After running a stop sign at around 1.30am in Florida, Damon, 47, seemed unsteady on his feet in the fiery altercation that included his spouse confronting investigators, who found the 1992 first-round pick to be almost four times over the alcohol limit for driving.

“I’m a good f***ing guy and I know people are trying to target me because I’m a Trump supporter,” Damon bizarrely said, referencing his multiple endorsements of the former US President, including being part of the cast for “Celebrity Apprentice” before the billionaire took office, joining the Republican’s infamous calls to “build a wall” against immigrants and echoing Trump’s description of Baltimore in 2019 as a “disgusting rat and rodent-infested mess.”

An officer replied “I don’t think that has anything to do with it”, told Damon that his political affiliations were “neither here nor there right now” and explained to him that his high-profile views were “not why I’m stopping you.” Damon rejected those assurances.

Damon and his wife were apprehended near a security kiosk for a gated community close to Orlando.

“Guys, we are all for cops,” Damon declared at one point, informing officers that he lived yards away while the pair repeatedly used the phrase “blue lives matter”.

Shocked he could even stand, holy smoke

Mangan-Damon swore at police and told them not to touch her after they attempted to guide her back into the passenger front seat of the car. “Yeah, she’s a tough girl,” said Damon. “She fights all the time,” he added, later concluding: “My wife’s crazy.”

Two-time World Series winner Damon appeared with Trump at campaign rallies and participated in sporting events at the White House during his presidency. “He’s doing a great job,” Damon said at an event at the Yankees Stadium in 2018. “Unfortunately, people don’t really want to hear the truth that’s out there.”

When he was asked how much he had drunk, Damon pinched his fingers to indicate a thimble while replying, “Oh, a little bit.”

😆😂🤣 what was his blood alcohol level again?

Exactly! He was super drunk too! He didn’t have a couple beers.

He agreed to take the test because he said he was a “big boy”, but reportedly failed to follow a red light with his eyes while keeping his head straight and struggled to perform a few steps in a walking exercise.

“I understand you had a couple of drinks,” an officer said to him. “It’s completely OK if you have some drinks and then drive, but my concern is that you might be too impaired to drive.”

Mangan-Damon was arrested and charged with battery on an officer and resisting with violence. Reports said that both paid bonds to leave the Orange County jail, with Damon’s resisting charge subsequently dropped.