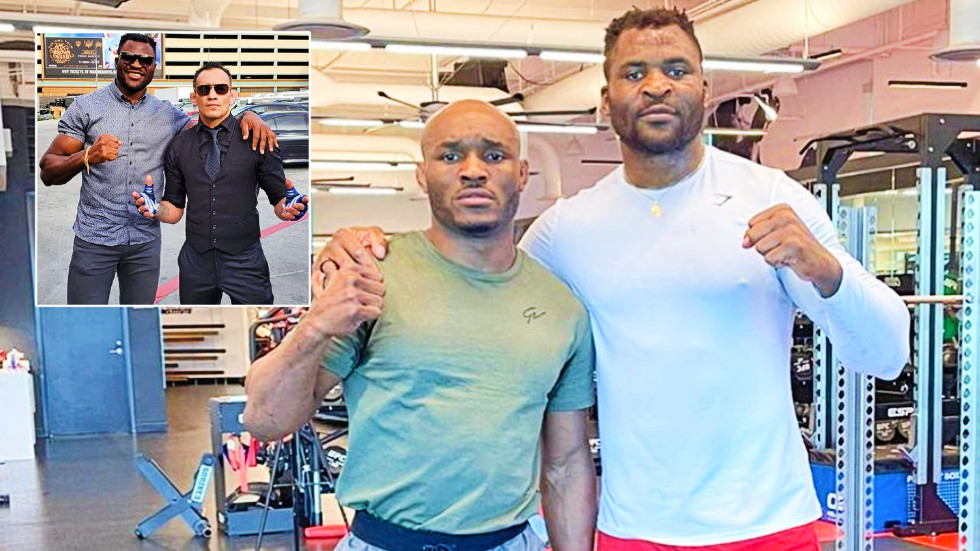 UFC heavyweight Francis Ngannou has posed with champion Kamaru Usman and declared “Africa vs everybody” ahead of his title showdown with Stipe Miocic at UFC 260, causing ex-champ Tony Ferguson to respond with his own message.

Thunder-punching Ngannou wants to become the first Cameroonian, African and Frenchman to win a UFC crown when he faces heavyweight king Miocic in Las Vegas on Saturday, and he shared a photo of himself in the gym with welterweight title holder Kamaru Usman beforehand.

The 34-year-old has spoken of his humble beginnings in Cameroon as a youngster, where he worked as a sand miner before moving to France to pursue his celebrated MMA career.

In a cheeky response to the man who has said he hopes to inspire Africans to dream big, ex-UFC lightweight champion appeared to support US fighter Miocic by replying: “Merica’.”

I see Stipe vs Ngannou exactly like Fury vs Wilder.Yes I know they are different sports, what I mean is skill will always prevail over power. I’m not saying Ngannou doesn’t have skill too but his skill set and fight IQ is nothing on Stipes. I got Stipe by KO or decision again. pic.twitter.com/gMF2I7wbKZ

Ferguson added his customary tagline of CSO – “champ s**t only” – in a dig at Ngannou’s prospects of dethroning giant veteran Miocic.

Ngannou posed with Ferguson in the city where he will fight at the weekend in a post shortly after ‘El Cucuy’s’ brutal defeat to Justin Gaethje in May, which denied him the chance of a title shot against lightweight champion Khabib Nurmagomedov.

“Tony Ferguson – the type of guy who is a beast,” he wrote at the time, grinning alongside Ferguson in a parking lot. “Think I can do some of his training methods.”

The number one-ranked heavyweight has spoken emotionally about his career path and rags-to-riches story in the build-up to meeting Miocic.

“This journey now is not only mine,” he explained to Bloody Elbow about his loyalties that go beyond patriotism. “It’s for all Cameroonians and for the whole of Africa and all of France, too.

“In Africa, in many parts of the continent, people do not allow themselves to dream, because what they dream of [seems] unreal. But I’m just trying to show that everything is possible.

“That dream, you can allow yourself. You have a right. It doesn’t matter what was the beginning or how you began.

“What’s more important is where you arrive. As long as you prepare for your arrival and you have the right mindset, you can do it.”

Ngannou has predicted that the first UFC event in Africa will take place in Nigeria, where Usman and middleweight champion Israel Adesanya were born.

Usman has had a busy week of training and socializing with fellow fighters, meeting Abu Azaitar, who is training with Javier Mendez and a team that includes one of the trainer’s fighters, Nurmagomedov.

‘The Nigerian Nightmare’ took a photo with lightweight champion Nurmagomedov and his cousin, Umar, while Azaitar, who is facing Marc-André Barriault, thanked the team and Nurmagomedov’s manager, Ali Abdelaziz, who he said had arranged a belated birthday gathering for him at his home in Las Vegas.

“[He] made me feel like I had a family in Vegas,” said Azaitar. “On the same day, my uncle, who I loved very much, passed away. It teaches me to be grateful and appreciate every single moment with my loved ones.”

Also on rt.com
‘So quick to jump on a hype train’: Jon Jones trolls Israel Adesanya as star falls short against Blachowicz at UFC 259