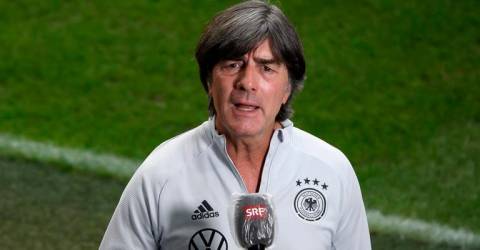 FRANKFURT: Germany coach Joachim Loew (pix) said his departure after this summer’s European championship following 15 years in charge was timed to allow his successor to build an exciting team that could peak at the Euro 2024 tournament on home soil.

Loew, who had a contract until 2022, led Germany to the World Cup title in 2014 and the 2017 Confederations Cup but his team crashed out in the first round in the 2018 World Cup and has been struggling to perform at the highest level despite an overhaul.

A 6-0 defeat to Spain in the Nations League in November was Germany’s worst ever defeat in competitive football.

“The time is right to hand over to a different coach. The overhaul we started in 2019 was the right thing. The current squad may be lacking a bit of experience but they have an unbelievable potential and we have very good quality,” Loew told a virtual news conference.

“I am deeply convinced that this young generation could peak most likely around 2024, with a tournament on home soil,” Loew said, flanked by German Football Association President Fritz Keller and national team manager Oliver Bierhoff.

Keller and Bierhoff said the process to find a successor would start now.

Germany will host the 2024 tournament and Loew said it should trigger the same enthusiasm in the country as the 2006 World Cup.

“This tournament, as in 2006, has to lead to an explosion, what we experienced in 2006, to a new way of thinking, new stimuli. A rejuvenation.”

“I don’t see myself in this position in 2024 and I think if we speak of rejuvenation this was the right time to give the new coach the necessary time.”

The 61-year-old was assistant to Jurgen Klinsmann from 2004-6 before taking over after the World Cup. He led them to the Euro 2008 final before winning the World Cup six years later.

His brand of football turned Germany into an attack-minded and highly skilled team in contrast to their past image of hardworking Germans who made up for their lack of technique with raw power and determination. – Reuters