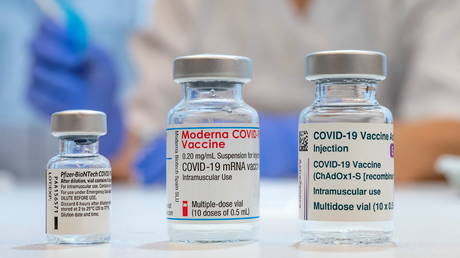 Washington has reportedly refused a request by AstraZeneca to loan some of the US’ stockpile of its Covid-19 vaccine – which cannot be used there yet – and deliver it to the EU, where the supplier is failing to meet its targets.

The rejection, reported by the New York Times based on information from unnamed sources in the Biden administration, showcases how rivalry over medical supplies may go against longstanding alliances – even ones as celebrated as the trans-Atlantic partnership.

The EU is facing a shortage of vaccines against Covid-19 and has been threatening to impose export controls in response. A shipment of 250,000 doses from Italy to Australia has already been banned by Rome.


The US already has tens of millions of doses of AstraZeneca’s vaccine stored on its soil, but they will not be deployed for weeks. The Federal Drug Administration (FDA) is yet to receive a request for approval for emergency use of the product, pending results of a clinical trial currently being conducted by the British-Swedish company. Regulators in some 70 countries have approved it, however, and could use extra supplies, should the US release its reserves.

Also on rt.com
EU to seek AstraZeneca doses from US amid Covid-19 vaccine supply shortfalls – media


The US’ ultimate need for the product remains in question, though, since FDA approval is not expected for weeks – and alternatives from Moderna, Pfizer, and Johnson & Johnson are being produced in the country in increasing numbers.

The US manufacturing roadmap seeks a target of more than a billion doses by the end of the year, most of it ready by summer. That number is more than enough to vaccinate the entire population.

Washington “may only briefly, or never, need the AstraZeneca doses if they are cleared for emergency use,” the Times wrote. The stockpile also comes with an expiration date – the vaccine can be stored for up to six months, according to producer’s recommendations.

Biden pledged this week to offer any surplus of vaccines against Covid-19 to other nations, but only after the needs of Americans are met. The US partially funded the development of the AstraZeneca vaccine and produced it under the Defense Production Act, which means the president will have to approve shipments to other nations. Such a move would come at a political cost to Biden, should he take it with the US population still not fully immunized.


The news comes as AstraZeneca and EU officials scramble to convince people that the vaccine is safe to take in the wake of a report that it may cause potentially fatal blood clots. Several member states have suspended its rollout, pending more information about the possible side effect, which is being investigated by the European Medicines Agency (EMA), the EU’s drug regulator.