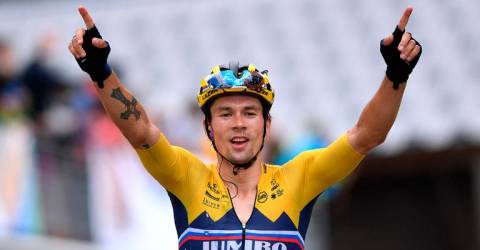 FRANCE: Overall leader Primoz Roglic (pix) extended his advantage by winning the sixth stage of Paris-Nice on Friday after the two closing days of racing were re-routed due to the coronavirus situation in southern France.

Slovenian Roglic took his lead in the yellow jersey over German Maximilian Schachmann to 41 sec with Spaniard Ion Izagirre in third place nine seconds further down.

Earlier in the day, Nice mayor Christian Estrosi announced the route would be altered with the finish outside the city to avoid a local Covid-19 lockdown.

The race, which traditionally finishes on the Promenade des Anglais, will end on Sunday instead around 40 kilometres north in the town of Levens which is outside the regional quarantine zone.

It will start from the Plan du Var, about 30 kilometres north of Nice, and will take the form of a quasi-loop.

Organising company ASO has yet to publish the technical details.

Saturday’s stage seven, which was due to set off from Nice, will now start from Le Broc and will end as planned in Valdeblore La Colmiane.

The area is under its third weekend lockdown following what the Alpes-Maritime regional authority described as “the continuing very worrying” health situation and “extremely high” pressure on the resources of local hospitals. – AFP