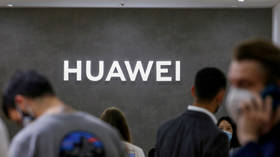 The Federal Communications Commission (FCC) has deemed Chinese telecom giant Huawei a threat to US national security, maintaining pressure on Beijing that some believed could ease under the new Biden administration.

The FCC announced on Friday that the firm, as well as four other Chinese companies, pose “an unacceptable risk to US national security or the security and safety of US persons.”

The regulator’s acting chief, Jessica Rosenworcel, said that the move would help “restore trust” in US communications networks. She did not explain what specific actions would be taken against the Chinese companies. Huawei has not yet responded to the designation.

The decision comes just a day after Bloomberg reported that the Biden administration issued new restrictions on Huawei, preventing US firms from supplying the Chinese telecom with products that can be used in 5G devices. American businesses had previously been allowed to supply Huawei with components, provided that they sought permission from the US government.

Beijing slammed the new rule as “unreasonable suppression” aimed at Chinese companies, and accused Washington of “violating the principles of market economy and fair competition.”

Huawei’s designation as a national security threat matches the hardline policy implemented by the preceding administration under Donald Trump. In June, the FCC blacklisted the firm as a danger to US interests, blocking American firms from using an $8.3 billion government fund to purchase equipment from companies. Huawei filed a legal challenge against the designation last month.

The Chinese tech giant had expressed hope that the new administration would take a different approach to trade issues. Victor Zhang, the company’s vice president, said in an interview in November that the attacks on Huawei were politically motivated and part of a “trade war” between the US and China, adding that Washington’s tune might change once Biden takes office.

As it launched a tariff war against Beijing, the Trump administration pressured Washington’s allies to reject business with Huawei and avoid using Chinese technology as they develop their 5G networks. Both the Chinese government and Huawei have repeatedly denied that the firm poses a threat to the US or any other nation.