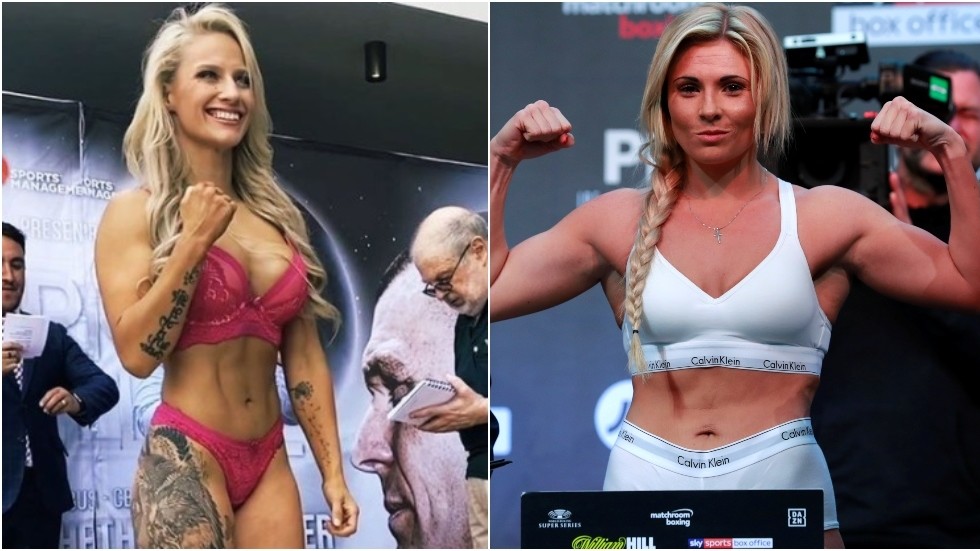 Boxing fans have accused promoters of greasing the wheels for curvy Aussie ‘Blonde Bomber’ Ebanie Bridges after she was handed a title shot against Britain’s Shannon Courtenay next month.

Bridges returned to the ring last weekend after more than a year out of action, defeating 45-year-old Kiwi opponent Carol Earl via unanimous decision in Sydney.

The blonde pugilist – who had turned heads by stripping down to a blue bikini for the weigh-in before the bout – is now preparing for a prompt ring return after being handed a late-notice shot at the vacant WBA bantamweight title against Courtenay in the UK on April 10, on the undercard of the Conor Benn vs Samuel Vargas showdown.

Courtenay, 27, had been due to face fellow Brit Rachel Ball, although the latter was forced out as she continues to recover from a Covid-19 infection.

Instead, the ‘The Baby Face Assassin’ will now take on the 34-year-old Bridges for a chance of gold.

For the undefeated Bridges – who also works as a math teacher – it is a significant step after just five professional outings against opponents whose caliber many would call into question. The latest WBA women’s bantamweight rankings listed Bridges down in ninth, one rung below her countrywoman Shannon O’Connell.

Courtenay, meanwhile, comes into the bout with a 6-1 record, having last stopped Poland’s Dorota Norek in the seventh round of their contest in December.

The Brit, who only made her professional debut in 2019, had been hoping to face Ball and avenge the sole blemish on her record which came in a decision defeat to the Midlands fighter last August at Matchroom Fight Camp.

The news that Bridges would be stepping in for Ball was announced by Matchroom on their social media accounts. – although it did not go down well among some fight fans.

“This makes no sense for women’s boxing or any boxing. Great sense for British boxing but should be a fair system. This is a joke tbh isn’t it.”

Courtney has been given an easy opponent for a world title, and neither of them are even in line for a world title no where near in line. This makes no sense for women’s boxing or any boxing. Great sense for British boxing but should be a fair system. This is a joke tbh isn’t it

“It is absolutely mental that either of these are fighting for a world title,” wrote another fan, while one added: “Depressingly tragic! Does nothing for women’s boxing but make a mockery of it.”

“Disgraceful from the WBA but then no one expects anything else. Nothing either of these fighters have done merits a world title shot. Nothing. The match would sell just as well without having to buy a belt,” read another response.

Some though saw the obvious benefits of pushing a pair of eye-catching female fighters, even comparing the strategy to the rise of men’s world heavyweight champion Anthony Joshua.

“[Two] good-looking girls, big fan bases generate loads of money, just like Joshua an easy route to the top then pick the easy fights [and build a legacy],” wrote the fan.

Bridges herself said she was “excited” at being handed the chance to claim a world title.

“When Eddie contacted me, it was really unexpected but I’m not going to say no to this chance,” said the fighter.

“I was gutted for Rachel as she’s a friend and I wish her well in recovery but opportunity knocks. This is a fight that fans have spoken about for a while now since I moved onto the British scene.

“I respect Shannon as a boxer, I think we’ll put on a great show but I’ll be the one leaving with the gold.

“This is a huge platform to showcase my skills and who I am, ‘The Blonde Bomber’, to the world. I’ll bring the fight to Shannon – I’m coming to win that world title, buckle up!”

Also on rt.com
‘She’s such a tease’: ‘Blonde Bomber’ strips off ‘for the boys’ as Muslim opponent takes scales to toilet for 2nd weigh-in (VIDEO)


Courtenay, meanwhile, said that while her opponent had now changed, her goal would be the same.

“All that’s changed is the opponent, the outcome is still the same and on April 10 I will be crowned world champion,” said the Brit.

“We’ll put on a great, non-stop action fight for the fans but I’m more determined and focused than ever and that world title is staying in the UK.”

Bridges had been due to contest the WBA bantamweight title against Rachel Ball last November, but the Aussie was forced out with an arm injury.

On that occasion Bridges faced similar queries over her credentials for the title shot, but fired back with the sarcastic message that “fake boobs definitely help.”

After Bridges defeated veteran Carol Earl on Saturday, her fans implored Matchroom chief Eddie Hearn to “sell the sh*t” out of the boxer, which he appears intent on doing.