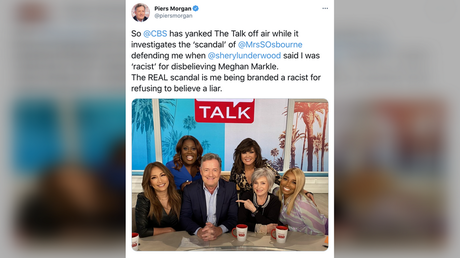 CBS has canceled episodes of “The Talk” for Monday and Tuesday amid an “investigation” of a heated exchange last week in which co-host Sharon Osbourne defended the right of Piers Morgan to opine about Meghan Markle, reports claim.

Plans currently call for resuming filming of live episodes on Wednesday, but producers will re-evaluate where the talk show stands as the probe progresses, entertainment website Deadline reported. The hiatus could even be extended or lead to more severe action against Osbourne.


The controversy began last Wednesday, after Osbourne had declared her support for former ITV presenter Morgan, who expressed skepticism over the Duchess of Sussex’s allegations that she had suicidal thoughts after being mistreated by UK media. Morgan quit his talk show amid a flood of viewer complaints and allegations that his criticism of Markle was rooted in racism.

Osbourne said she didn’t share Morgan’s view, but she noted that he was paid to give his opinions and speak what he saw as the truth. The resulting row on “The Talk” was a pop-culture trainwreck, starting when co-host Sheryl Underwood asked Osbourne what she would tell people who see her support for Morgan as giving “validation or safe haven to something that he had uttered that is racist.”

The 68-year-old Osbourne, wife of 1970s rock star Ozzy Osbourne, demanded that Underwood explain exactly what Morgan had said that was racist. As she continued to press for an answer, Osbourne became visibly angry and went on an expletive-laden rant. Underwood called for a commercial break, but Osbourne continued demanding an answer when the show returned.

Also on rt.com
Piers Morgan says he ‘won’t be going back’ to Good Morning Britain after petitions for his return rack up 200,000+ signatures


She later asked, “If Piers doesn’t like someone and they happen to be black, does that make him a racist?” After her co-hosts said “no,” she asked, “So why can’t it be, he just doesn’t like her? Why does it have to be racist?”

Critics on social media ripped Osbourne for proving that she’s a “racist gas-lighter” and “top-tier toxic,” to the point of daring to tell her black co-host not to cry. Osbourne apologized for her outburst on Thursday, saying, “I am truly sorry. I panicked, felt blindsided, got defensive and allowed my fear and horror of being accused of being racist take over.”

CBS on Friday announced its investigation, saying, “We are committed to a diverse, inclusive and respectful workplace. All matters related to the Wednesday episode of ‘The Talk’ are currently under internal review.”

News of the cancelation didn’t go down well on social media. Conservative author Mark Hyman commented that the network’s handling of the incident shows that it doesn’t support diversity of viewpoints – in this case Osbourne’s contention that Morgan isn’t racist for having a negative opinion of Markle.

CBS states it supports diversity of viewpoints … until it doesn’t. “The Talk” on hiatus while it investigates Sharon Osbourne’s statement she supports Piers Morgan freedom to state his views even if she disagrees w/ him. https://t.co/PNUgBuwMDd

“This is getting insane,” Donald Trump Jr. said on Monday. “No other shows are being pulled off the air because someone who actually knows someone else doesn’t believe they’re racist,” he added.

Morgan himself weighed in, saying that it was absurd for CBS to suspend the show over the “scandal” of Osbourne’s daring to support him. “The real scandal is me being branded a racist for refusing to believe a liar,” he said.