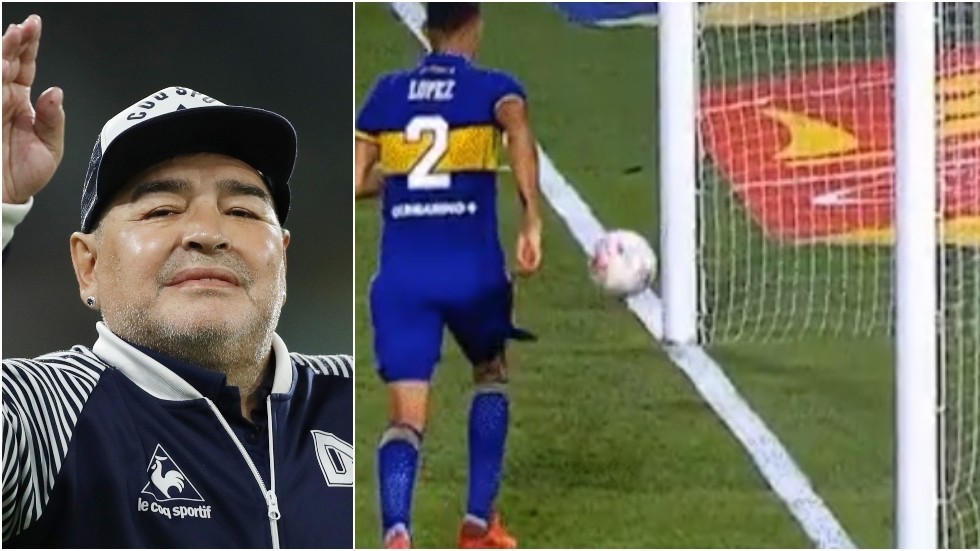 He may have passed away several months ago but some fans are claiming that Diego Maradona’s influence is still being felt in Argentine football after incredible scenes in the ‘Superclasico’ between Boca Juniors and River Plate.

With the scores standing at 1-1 in the final minute of Sunday’s showdown between the two fierce rivals, River Plate pushed forward for a late winner at Boca’s La Bombonera stadium and appeared to have secured a breakthrough when the ball was accidentally headed towards his own goal by Carlos Izquierdoz – only for it to dramatically spin out of the goal just as it appeared set to cross the line past the despairing clutches of goalkeeper Esteban Andrada.

Izquierdoz clearly feared the worst and immediately had his hands on his head as he contemplating his late impact on the game, only for the ball to take a “supernatural” detour from the goal.

Andrada then scampered to protect his goal from a follow-up shot and will no doubt have thanked his lucky stars after witnessing one of the most unusual bounces of a ball seen on a football pitch in recent memory.

Some fans, though, aren’t putting the unusual incident down to good fortune. In the aftermath of the game social media was abuzz that it wasn’t the influence of Lady Luck which kept the ball from crossing the line, but it was the handiwork of one of Boca Juniors’ most famous sons – Diego Armando Maradona.

The Argentine football icon, who passed away last November, represented his beloved Boca Juniors in two spells throughout his glittering career – and some superstitious fans suggest that it was Maradona who played the late spoiler to River Plate from beyond the grave.

“[The] only explanation is that Maradona’s spirit spun that ball back outwards,” wrote one fan online of the incredible footage.

“The more I see it, the more crazy it looks,” wrote another, while one more agreed that it was definitely Maradona’s “spirit” who had the late telling impact on the game.

Maradona, who was infamous for his ‘Hand of God’ goal against England in the 1986 World Cup in Mexico, remains a beloved figure in his native country – and judging by the reaction to the unusual occurrence at Sunday’s ‘Superclasico’, his influence may well be felt for some time yet.