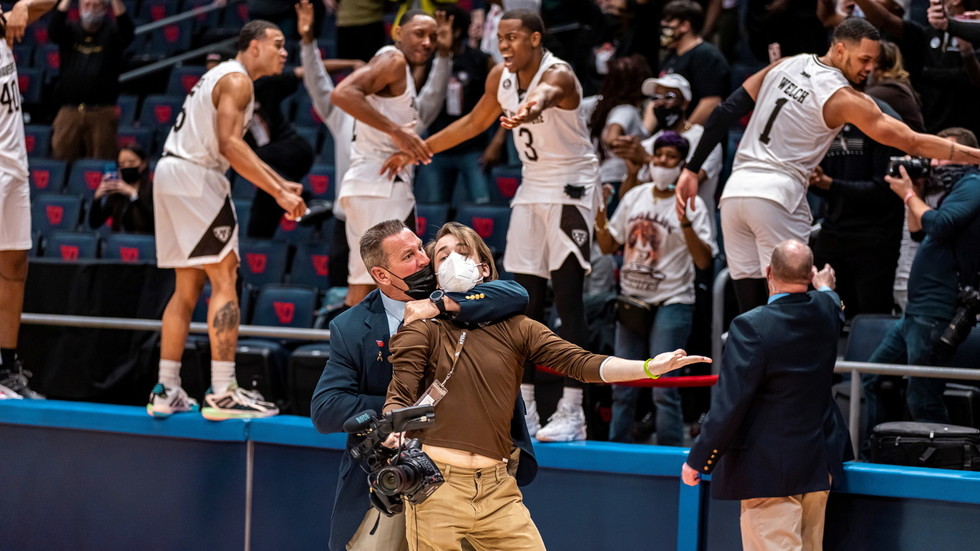 The US college basketball match-up between St. Bonaventure and VCU witnessed contentious scenes as a security guard was pictured placing a videographer in a ‘chokehold’ in an image which was later described as “bizarre.”

St. Bonaventure University claimed a 74-65 win at the University of Dayton Arena in the Atlantic 10 on Sunday to seal a place in the NCAA’s ‘March Madness’ tournament for the first time since 2018.

But the win was marred by an ugly clash between Bonaventure videographer identified as Nathan DeSutter and a courtside security guard.

After the court clock ticked down and players began to celebrate, the cameraman was seen rushing to film them.

He was initially prevented from getting closer, but then dodged the guard and continued to film. The security guard was then seen briefly placing his arm around the videographer’s neck before letting him go and shoving him off court.

The image was captured by University of Dayton student photographer Griffin Quinn and went viral after being shared by broadcaster Jeff Eisenband, who described it as “one of the most bizarre sports photos you will ever see.”

One of the most bizarre sports photos you will ever see: A security guard at the Atlantic 10 Title Game put a cameraman in a chokehold as he was filming St. Bonaventure’s on-court celebration.Photo captured by St. Bonaventure student @griffinpquinn. pic.twitter.com/IF7zftij64

Quinn later clarified the context to the snap, writing on Twitter: “I don’t know the name of the videographer shown, but he evidently works with SBU and had been on the court during parts of the game, but I do not know for certain what his credentials granted him or what his limitations were.

“Other media personnel had assigned seats in the stands. When the final buzzer rang, the videographer was shooting SBU’s celebration near the basket when the shown security guard tried pulling him away. The videographer continued to try to film.

“The security guard must’ve thought he had rushed onto the court after the buzzer rang, which was prohibited for media members who had assigned seating in the stands. This videographer, though, had been on the court earlier.

“He was let back onto the court after SBU staff and team members spoke with security, explaining his role with the team.”

A row soon broke out over who was in the wrong, with some claiming the chokehold had been “too much” and others arguing that it was the videographer’s job to show clearly that he had the right credentials to be filming in that spot.

Others claimed that describing the security guard’s actions as a ‘chokehold’ was exaggerating what happened.

I would also talk to security before the event to let them know my plans for coverage & positioning to avoid any issues.

Not excusing the aggressiveness but if you guys think this is a “chokehold” you clearly have no idea what constitutes a choke. His hands on the far shoulder makes it nearly impossible to choke someone. And he let go rather quick on top of that.

It was reported that the Atlantic 10 will investigate the incident, which if anything has at least earned student photographer Quinn his 15 minutes in the spotlight for perfectly capturing the scene.

St. Bonaventure will face LSU on Saturday in its first game in the March Madness extravaganza since 2018, and with a ranking of ninth – its highest since 1979.