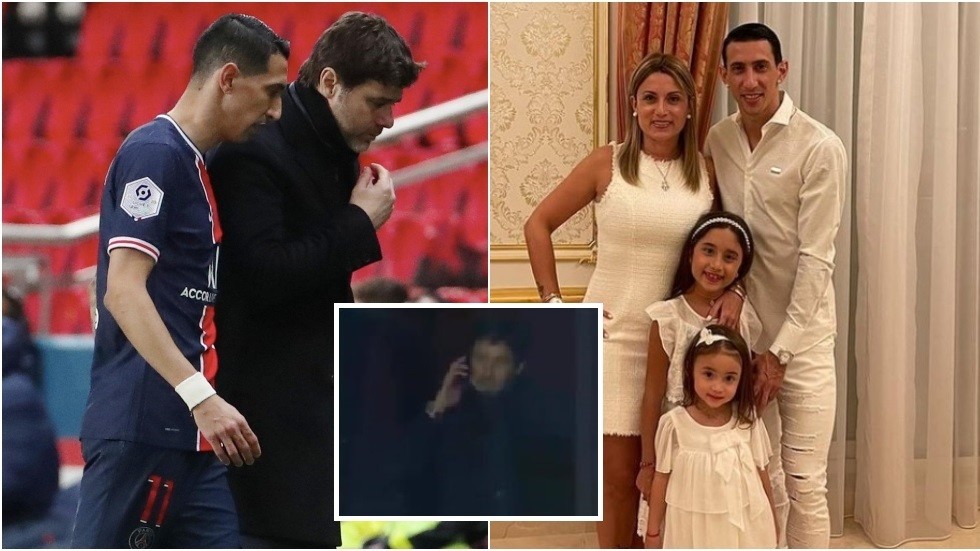 There were extraordinary scenes at the Parc des Princes on Sunday night as PSG winger Angel Di Maria was rushed off the pitch after it was learned that his home had been raided with his family inside.

The Argentine star was substituted in the 62nd minute of the Ligue 1 clash with Nantes after PSG director Leonardo had been seen shouting down to manager Mauricio Pochettino after holding a phone call in the stands.

Pochettino subbed off Di Maria, speaking intently to him as the pair went off down the tunnel before the manager reemerged.

It was later revealed that Di Maria’s home in the plush Neuilly-sur-Seine suburb of Paris had been targeted while the star’s family was inside, and that the footballer had returned immediately.

Conflicting reports stated that the robbery had been ‘extremely violent’ and that Di Maria’s family had been held captive, while Le Parisien stated that they had been in a different part of the house during the incident and did not hear anything. The contents of an upstairs safe were said to have been taken.

The Di Maria family suffered a similar fate while he was playing at Manchester United in 2015, when burglars raided his home in Cheshire while he was eating dinner with his wife Jorgelina Cardoso and one of their daughters. That incident is said to have been part of the reason why the footballer was keen to turn his back on the Old Trafford club and head to PSG after just one season in the Premier League.

Di Maria was not the only PSG star to fall victim to criminals on Sunday, as the family of Brazilian teammate Marquinhos reportedly suffered an even more harrowing experience.

According to reports in France, the 52-year-old father of the defender was held captive by two men along with his two teenage daughters at his home in the commune of Chatou.

In that incident thieves are said to have made off with luxury bags, jewelry and around €2,000 ($2,385) in cash. Marquinhos played the full match and was not substituted.

At the end of January, PSG teammate Mauro Icardi and his family suffered a similar ordeal when their home in Paris was targeted in a reported €400,000 raid.


Sunday’s events capped a miserable evening for PSG as they slumped to a shock 2-1 home defeat to Nantes which keeps Pochettino’s team second in the table, three points behind Lille.

“It’s not an excuse but there was a drop in energy,” the PSG boss said when assessing the defeat and the situation with Di Maria.

“We talked about things other than football after the game in the locker room.

“The truth is that the first period we controlled the match, but after the equalizer, we had trouble and we were not strong enough to hang onto this match.”

Di Maria, 33, recently extended his contract with the French giants for one more season, having been at the club since the summer of 2015. The Argentina international has made 249 appearances, scoring 87 times.