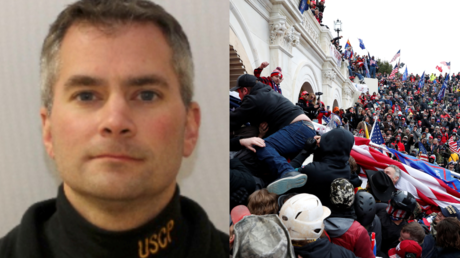 Two men have been arrested and charged with assault on Capitol Police officer Brian Sicknick, who died after the pro-Trump riot in January. Sicknick’s cause of death, however, is still unknown.

Julian Elie Khater of Pennsylvania and George Pierre Tanios of West Virginia, both in their 30s, were arrested on Sunday and are scheduled to appear before a federal court on Monday.

Video footage from inside the Capitol on January 6 allegedly shows Khater spraying three police officers, one of whom was Sicknick, with a can of chemical spray provided by Tanios. Khater allegedly calls the substance “bear” spray in the video. It is unclear if the alleged spray attack had anything to do with Sicknick’s death a day later.

Sicknick’s death has not been ruled a homicide. However, in the hours following the riot, which kicked off after then-president Donald Trump urged his supporters to march to the Capitol and protest against the certification of Joe Biden’s election win, multiple media outlets claimed that the officer had been struck by a rioter with a fire extinguisher.


No autopsy or toxicology results have been made public, yet the claim that Trump’s supporters caused Sicknick’s death was repeated in an article of impeachment against Trump, which charged the former president with inciting an “insurrection” that “injured and killed law enforcement personnel.”

Capitol Police said earlier that Sicknick was injured “while physically engaging with protesters,” and the agency’s acting chief said his death was the result of “injuries sustained while on duty.”

Khater and Tanios are two of several hundred people arrested for their alleged role in the riot. Some 300 have already been charged, and prosecutors are weighing charges against 100 more, according to court filings seen by Fox News last week. Khater and Tanios are charged with nine counts, including assault on three officers with a deadly weapon, civil disorder, and obstruction of a congressional proceeding. If convicted, they could face up to 20 years in prison.