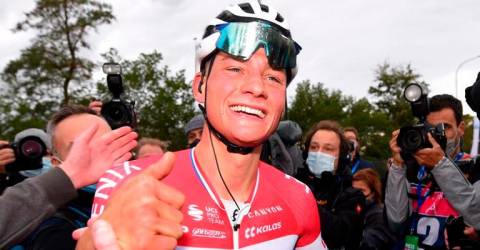 Dutchman Van der Poel first attacked the main bunch with 60 kilometres left on a stormy, cold day in the Marche, accelerating repeatedly until he was on his own before extending his advantage to almost three minutes.

He seemed to have another dominant win in the bag but cracked in the finale and Slovenian Pogacar, who had jumped away from a group of overall contenders, finished only 10 seconds behind.

Van der Poel did not even have the strength to raise his arms to celebrate.

Belgian Wout van Aert, who is second overall, limited the damage to end the stage in third place, 49 seconds off the pace.

After the 205km ride from Castellalto to Castelfidardo, Pogacar leads Van Aert by 1:15 and Spain’s Mikel Landa by 3:00 with 2019 Tour de France winner Egan Bernal in fourth place, 3:30 off the pace.