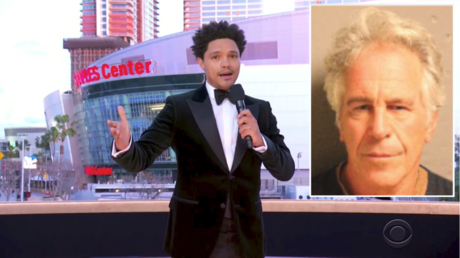 While accepting an award at the 63rd Grammy’s ceremony, one hapless producer inadvertently dropped one hell of a clanger, thanking disgraced financier and convicted pedophile Jeffrey Epstein.

While accepting the award for ‘Best Music Film’ for his documentary ‘Linda Ronstadt: The Sound Of My Voice’ on Sunday night, producer James Keach, 73, appearing via videolink, made the miserable mixup.

“Excellent. I want to thank Linda Ronstadt for allowing us to make this movie, Rob Friedman, Jeffrey Epstein,” Keach said, accidentally mixing up the names of the film’s two directors, Rob Epstein and Jeffrey Friedman, combining them into he-who-shall-not-be-named.

Jeffrey Epstein was a wealthy financier accused of rape, sexual assault and human trafficking of dozens of women, including minors, in addition to allegedly sharing them around with the wealthy political and celebrity elite during parties at his infamous island.


Everyone from former US presidents Donald Trump and Bill Clinton, to the British Royal Family’s Prince Andrew, and countless actors and musicians such as Kevin Spacey and Mick Jagger, are known to have associated with Epstein, though the extent of their respective friendships and time spent together varies widely.

Needless to say, the shocking shoutout, unintentional or not, became a major talking point online.

“If you’re feeling down just remember that you aren’t the guy who just accidentally thanked jeffrey epstein for his grammy,”wrote another.

Epstein died in 2019 after apparently hanging himself in his Manhattan prison cell, though many dispute this telling of events, creating a conspiracy theory which has become an almost ubiquitous meme across social media.


“Can’t stop thinking about the guy who accidentally thanked Jeffrey Epstein for his Grammy,”added another Twitter user.

“Imagine accepting a Grammy Award on behalf of your friend and accidentally thanking Jeffrey Epstein instead of the actual producer […] because like, that just happened live on air,” another user tweeted.

Elsewhere, Beyoncé became the winningest female artist in history, scooping up her 28th Grammy Award in the Best R&B performance category, while Taylor Swift also made history, becoming the first female artist ever to win a third Album of the Year award.