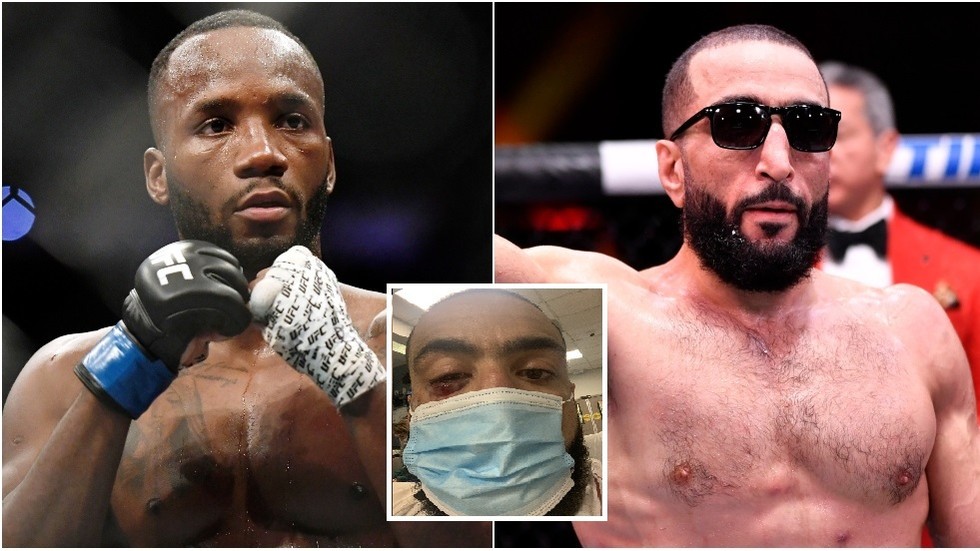 UFC welterweight Belal Muhammad has called for an immediate rematch with Leon Edwards after an inadvertent second-round eye poke from the Brit brought an early end to their main event bout last weekend.

In what was his first UFC bout since July 2019 owing to a series of outside of the cage mishaps which threatened to scupper his ascent through the 170lbs rankings, Edwards’ misfortune continued in the cage at the UFC Apex on Saturday night in Las Vegas.

After an impressive opening round for Edwards, the Jamaican-born Birmingham native connected with an accidental poke to his opponent’s right eye early in the second – immediately prompting a visibly-concerned Muhammad to pull back before the referee subsequently declared the fight as a no-contest when Muhammad was deemed unable to continue.

Also on rt.com
UFC fans and fighters demand action as SICKENING eye-poke causes Edwards-Muhammad clash to end in no contest


Edwards, who was chasing his ninth consecutive win in the talent-rich welterweight division, avoided disqualification because the eye-strike was considered by officials to be accidental – and because the fight was yet to reach the conclusion of the second round, the no-contest result was declared by the cageside officials.

Muhammad has since written online that the vision is slowly returning to his injured iris and has called for a do-over – but Edwards doesn’t seem quite so keen.

“I can’t see out of one eye just talked to my bro [Ali Abdelaziz],” he wrote on Twitter. “Leon’s not getting the next title shot so might as well fight the only guy willing to fight you we got unfinished business.”

Edwards used his post-fight interview to attempt to re-establish his status for an opportunity at Kamaru Usman’s welterweight world title and after a near two-year hiatus from the octagon, suggests that he isn’t willing to take a sideways step in his pursuit of gold.

“I don’t feel I need to fight him again,” Edwards told the media in Las Vegas on Saturday.

“I only fought him because all the other guys turned me down. The writing was on the wall. I was winning the fight clearly. And I don’t feel I need to fight him again. I need to move forward. I’m on an eight fight win streak. That’s the third most in the promotion’s history. It’s me, Usman and GSP. I feel like I’ve earned my way for a big fight.”

Edwards doubled-down on his stance in a post-fight statement to his Instagram page in which he said that he was “devastated” at the outcome of the fight and that he wishes Muhammad a full recovery.

“Thank you for all the love and support from my true fans and supporters,” Edwards wrote. “I’m devastated with the result and wish Belal a full recovery. On this journey I’m no stranger to struggle and frustration, but you can not break me. I felt great in there I was just getting warmed up but is what it is. I’ll see you soon.”

The UFC have yet to indicate their interest in repeating the Edwards-Muhammad fight (in stark contrast to Dana White’s immediate announcement of a rematch between Petr Yan and Aljamain Sterling following their own controversial finish at this month’s UFC 259).

The UFC, as well as Edwards himself, are thought to be keen on a top contender matchup with former title challenger Colby Covington, the fighter who was first offered the bout opposite Edwards.

However, the notoriously brash Covington indicated in a recent interview that he was too busy romancing fellow UFC fighter Polyana Viana to consider the fight. That, and the pay on offer wasn’t to his liking.

With champion Usman widely expected to next defend his world title in the late summer against former foe Jorge Masvidal, the UFC and Edwards will likely again pursue a fight against Covington – with Belal Muhammad’s brief cameo in the cage last weekend likely to be as close as he gets to the summit of the welterweight division for some time.

Also on rt.com
‘I have unfinished business with Masvidal’: UFC star Leon Edwards eyes 3-piece & soda revenge ‘inside or outside the cage’ (VIDEO)