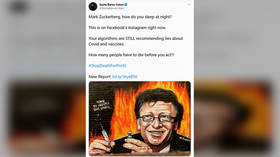 Facebook is rolling out a tool that will make it easier for people to find information about where and when they can receive a Covid-19 shot, CEO Mark Zuckerberg has announced, as the platform fights disinformation about the jab.

In a message posted to the social media platform, Zuckerberg said that Facebook was launching a feature that will show users places nearby that are offering the shot, and will also help them make an appointment for it. The tool, part of the platform’s ‘Covid Information Center,’ could help “millions” of people make vaccination appointments, the CEO said. The tool will also be available on Instagram, which Facebook owns.

The company will also be working with health authorities and governments to develop chatbots that can register vaccination appointments via WhatsApp, another Facebook-owned platform. According to Zuckerberg, governments and nonprofits have already sent more than three billion messages providing information about the Covid-19 jab using official WhatsApp chatbots.

Zuckerberg also highlighted work that Facebook has done to weed out what it has described as misinformation about Covid-19 vaccines. He claimed that the social media platform has provided “authoritative” information about coronavirus to more than two billion people.

Doubling down on its efforts, Facebook will begin adding labels on posts about Covid-19 vaccines that will show additional information from the World Health Organization.

“The data shows the vaccines are safe and they work. They’re our best hope for getting past this virus and getting back to normal life. I’m looking forward to getting mine, and I hope you are too,” Zuckerberg wrote.

However, there remains considerable controversy over fact-checking and other content policing on the social media platform. Facebook’s Chief Product Officer Chris Cox acknowledged in an interview that, while the company takes false claims “very seriously,” there remains “a huge gray area for people who have concerns” about the vaccine.

Zuckerberg appears to have once harbored his own reservations about mNRA shots. In a video from last year obtained by Project Veritas, the Facebook CEO said that “we don’t know the long-term side effects of basically modifying people’s DNA and RNA to directly code in a person’s DNA and RNA.” He has since come out strongly in support of Covid-19 vaccines.