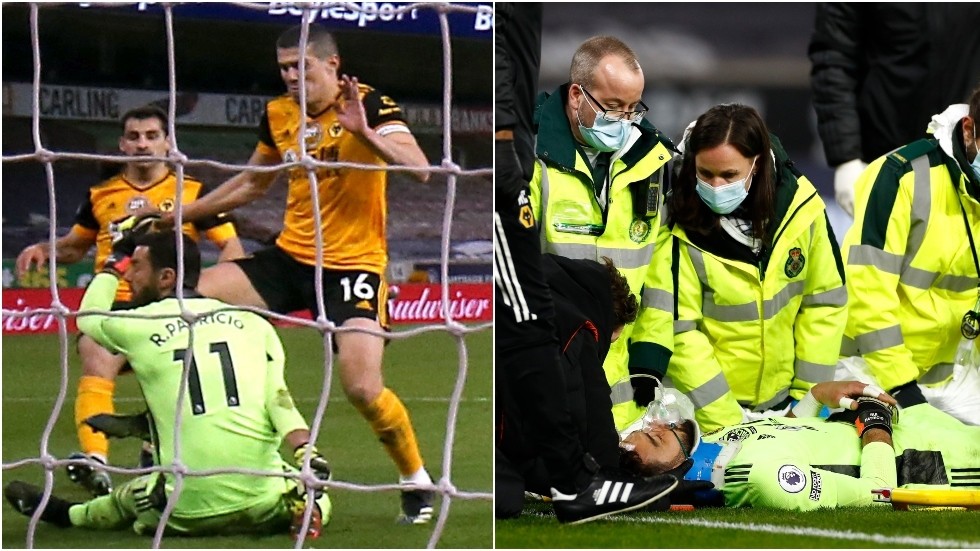 Wolverhampton Wanderers goalkeeper Rui Patricio was thankfully “conscious and sitting up” last night after fears for his health following a sickening blow to his head in the Premier League clash with Liverpool.

The veteran Portuguese stopper took a knee to the temple from teammate Conor Coady as the pair attempted to thwart Mo Salah towards the end of Liverpool’s 1-0 win at Molineux.

Patricio, 33, lay prone on the pitch as he was treated for around 14 minutes before being stretchered off while being supplied with oxygen.

Fears immediately spread across social media as fans and fellow professionals sent their best wishes to the stricken star.

Wolves boss Nuno allayed the worst of the concerns in his post-match interview, saying the stopper was “OK” and would make a recovery.

“He is totally conscious and remembers what happened, he is aware,” the Portuguese manager said.

“It was a collision with the knee of Coady on the head. We have spoken already. He is OK. All these situations when it is the head get us worried. He is going to recover.”

“He’s okay, he’s totally conscious and remembers what happened.”Nuno Espírito Santo provides an update on Wolves’ Rui Patricio after the goalkeeper was stretchered off with a head injury in the closing stages of their defeat to Liverpool. pic.twitter.com/3V8GnddXwE

The disturbing scenes were reminiscent of the horror head injury suffered by Wolves’ forward Raul Jiminez back in November.

On that occasion, the Mexican fractured his skull in a collision with Arsenal’s David Luiz and is still forced to watch matches from the sidelines despite having returned to training.

Liverpool’s former Wolves’ forward Diogo Jota – who scored the winner on Monday on his return to Molineux – said that incident with Patricio puts football in perspective.

“Life is more important, we wish him a speedy recovery,” Jota said.

“Life is more important.” ❤️Diogo Jota sends a message to his former teammate Rui Patricio after the Wolves ‘keeper suffered a potentially serious injury in the closing stages of #WOLLIV. pic.twitter.com/JBuuuiYEea

Elsewhere, there was fierce debate over the moment which caused the collision between Coady and Patricio, as Salah raced through to score only to belatedly be flagged offside.

The Daily Mail’s Martin Samuel said that the delayed flag from the linesman – which is more common now that football has the use of VAR – was “an accident waiting to happen” and allowed situations like Patricio’s to take place.


The win for Liverpool stemmed a run of two successive Premier League defeats for Jurgen Klopp’s men, boosting their chances of a Champions League spot as they moved to win within five points of fourth-placed Chelsea.

The German said it may not have been pretty, but “three dirty points” were crucial for the beleaguered defending champions.

“It’s all about the result,” Klopp told Sky Sports. “It was a big fight. We won three dirty points, and I’m fine with that if that’s what it takes to try to get back on track.”

Speaking on Patricio, Klopp added: “It was an awful situation. I have spoken to Wolves staff, they are rather positive. It was a proper shock.”

The defeat for Wolves keeps them down in 13th in the table and without a win in their last four games.