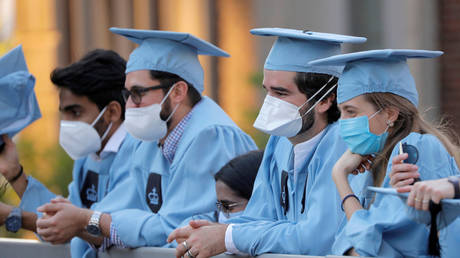 Ivy League Columbia University has joined the growing pool of colleges hosting identity-politics-based graduation ceremonies, offering students not one but six commencements in a baffling bid to scatter their sense of belonging.

The prestigious college plans to hold six separate graduation ceremonies for students based on race “and other aspects of how they identify,” celebrating attributes including low-income/first-generation collegiate status as well as sexual orientation (with a “Lavender” event aimed at the “LGBTIAQ+ community”).

Columbia’s website mentioned additional graduation ceremonies for Native, Asian, “Latinx,” and black students to be held at the end of April for students completing their studies at Columbia College, Columbia Engineering, the School of General Studies, and Barnard College – all schools falling under the umbrella of Columbia University. The site also mentioned an “FLI Graduation” for “first generation and/or low income community” in addition to the Lavender option.

Also on rt.com
Victory for free speech or empty rhetoric? Cambridge University pledges to ‘tolerate’ all views – but not everyone is convinced


The deadline for nominating students for “Multicultural Affairs Graduation Cords” – doled out to students in Columbia’s various colleges “who have demonstrated an outstanding commitment to inclusion, global diversity, social justice and multiculturalism” – was Sunday, though students who excelled in the more pedestrian fields of traditional academic achievement are presumably still able to collect their accolades in the usual manner. A general commencement ceremony is to be held on the morning of April 30 following the diversity-fest. The black students’ commencement takes place that afternoon, presumably after the general commencement concludes.

Ironically for events hyped as promoting togetherness, all of Columbia’s commencement ceremonies will be held exclusively online due to the ever-looming threat of the coronavirus, the school announced on its website.

Columbia’s website offers students a chance to “participate as graduates in our virtual ceremonies,” offering them “a more intimate setting for students and guests to gather, incorporate meaningful cultural traditions and celebrate the specific contributions and achievements of their communities.”

Students looking to participate in these special ceremonies are asked to register by Sunday “in order to secure their multicultural graduation gift” as part of their preferred community – Native, Lavender, Asian, FLI, Latinx, or Black. The six options are scheduled so as not to overlap, meaning one student could theoretically attend all seven ceremonies.


Columbia is far from the only university to encourage its white students to dip their toes into the waters of wokeness. Last month, Young America’s Foundation (YAF) reported on a “Whites-only caucus” at Elon University designed to “give white people a space to learn about and process their awareness of and complicity in unjust systems without harming their friends of color,” though the event was ultimately canceled.

Said to be organized by students on campus, the event was axed at the last minute because it would have been “at odds with university policies,” YAF reported.

The event was initially heralded as “one part of a lifelong and multifaceted commitment to antiracism for white-identifying people who are passionate about racial justice.”

Columbia is not the first university to offer multiple commencement options for its diverse student body, either. In 2019, Virginia Tech offered its students not one but 10 separate graduation ceremonies based on attributes including race, sexuality, and even sobriety. Students were given the option to attend ceremonies based on their identification as recovering addicts, veterans, members of the LGBTQ+ community, indigenous Americans, Muslims, or any of a number of identity options, with many of the ceremonies curiously timed to overlap.