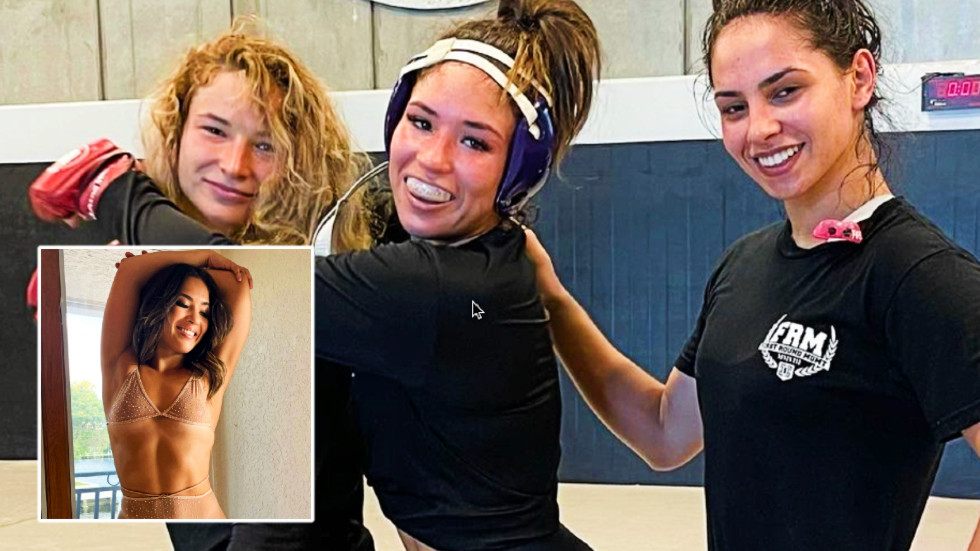 MMA stars Valerie Loureda, Maryna Moroz and Ariane Lipski have shared photos of themselves at top US gym Top Team – and Loureda has stayed busy away from training, shooting a catwalk clip with former WWE favorite Danielle Moinet.

Known for her six-year spell as a WWE wrestler under the name Summer Rae between 2011 and 2017, model, actress and former American footballer Moinet, who has more than 1.7 million followers on Instagram, joined Bellator MMA fighter Loureda for an impromptu video on the platform.

The pair pouted and wore glamorous dresses as they strolled towards the camera before turning their backs and dancing, with Moinet winking and blowing a kiss to viewers.

Unbeaten newcomer Loureda was also feeling the love in the gym, heading to MMA powerhouse Top Team, where a who’s who of top fighters continue to train including Jorge Masvidal, Petr Yan and Amanda Nunes.

Fellow flyweights Ariane Lipski and Moroz, who both fight in the UFC, were waiting for her in a session that Ukrainian Moroz revealed she had used to hone her wrestling skills.

Brazilian ‘Queen of Violence’ Lipski shared a separate photo with Loureda, writing: “When we are training together, we grow. Real queens fix each other’s crowns.”

Loureda reflected on the contrast between her grueling training sessions and her polished, pin-up image away from the gym. “I live a double life,” she wrote, having completed another session as she prepares for a return that could come on one of Bellator’s cards in Connecticut in April and May.

22-year-old Loureda and Moroz, who is six years her senior, now have another commonality in the form of their own subscription websites for fans.

Choosing to plot their own paths rather than head to adult site OnlyFans, which they often receive requests to join from their supporters, the pair offer their admirers exclusive content for $9.99 a month, enticed by glossy covershoot-style photos.

Hollywood wannabe Loureda posed in a sheer outfit and included a close-up of her behind as she encouraged fans to head to the site, which includes the tagline: “Welcome to the glamorous life of a professional badass.”

Moroz launched her saucy site by popular demand last week, although she warned fans that there may be delays to her responses to messages because of her demanding training schedule.

‘The Iron Lady’ published footage of her cat and shots of a variety of supplements and foods that help her to train before sharing photos of a lingerie website that she was looking at for new outfits.

“Choosing a new image for a photo session,” she added. “What to choose?”

Also on rt.com
‘I am going to be MMA’s biggest star’: Bellator brawler Valerie Loureda shares snap with 50 Cent as she promises to dominate sport