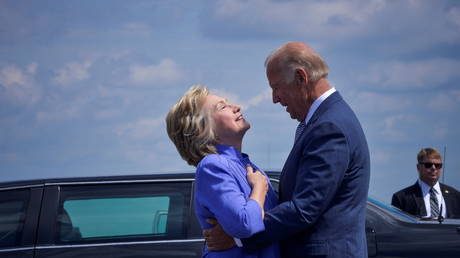 Having safely delivered the 2020 election to President Joe Biden, Twitter’s keyboard-warrior #Resistance has struggled to find the kind of meaningful cause that can reliably fill up entire days with productive partisan trolling.

Also on rt.com
Hillary Clinton is writing a political thriller about a novice secretary of state who saves the world. Here’s a sneak preview…


However, Clinton lawyer Marc Elias appeared to stumble over just such a mission on Wednesday, rustling up a controversy in what appeared to be an effort to promote the work of his latest project, Democracy Docket. The attorney proudly declared he was still “with her” – a reference to Hillary Clinton’s 2016 campaign slogan – whipping up a hashtag that quickly drew support from fellow Hillary fans on social media.

Smug supporters of the twice-failed presidential candidate sang her praises, insisting she had been “so right” about the perils awaiting the nation should it fail to elect her as president in 2016, and blaming right-wing misogyny for her failure to appeal to the electorate.

Almost incalculable how much better our nation would be today if she were elected President.BTW – to the 40,000 Democrats in PA, WI, and MI who weren’t “inspired” to vote for her 4 years ago – this is all on you. The choice could not have been more clear.#ImStillWithHerpic.twitter.com/lBPDnBtowt

#ImStillWithHer Hilary has been demonized for decades, this is what right wing extremists do to successful educated women. The right wing slime machine did great damage to Hilary, for doing nothing than being very good at what ever job she was given. pic.twitter.com/X0NpDc80oy

However, many users were quick to smack down the stirrings of Clintonite nostalgia, pointing out that the failed candidate had in many ways been the architect of her own demise, from pushing the GOP to nominate Trump to digging her own political grave with her infamous takedown of half the electorate as a “basket of deplorables.”

Seriously why tf would anyone still be saying #ImStillWithHer? She literally hand picked and elevated Trump. 🤦‍♀️

It’s crazy to see really. If anyone ever dares to bring up facts about her losing to the easiest person to beat & how she used the pied piper strategy (people can check WikiLeaks), they just reply that you’re mad Bernie lost lol They’re the only ones still mad making hashtags

Others highlighted the cultish nature of the perennial candidate’s fanatical supporters.

#ImStillWithHer is peak cult shit lmaoShe lost to an idiot man-child from a game show, whom she helped elevate in the first place.Next time nominate someone who isn’t dogshit and a right-winger with zero charisma and negative popularity.

Sometimes I think the US has a problem with cult-like worship of politicians and public servants. Then, I see that there’s currently a Twitter trend for somebody who ran for President 5-years-ago and realize, naw, everything’s fine. #ImStillWithHer

But one thing both sides could agree on was that the US would have been a very different country – for good or ill – had Clinton won in 2016.

Team Clinton propped up Trump in 2016 because they thought he would be easier to beat, then spent the 2020 primaries attacking Bernie because they blamed him for their loss four years earlier. Who is out there unironically tweeting #ImStillWithHer in the year of our lord 2021???