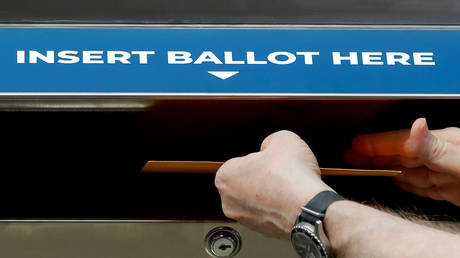 The Joe Biden administration is reportedly preparing new sanctions against Russia after an intelligence assessment claimed to find attempts at interference by Moscow, Tehran and other usual suspects in the 2020 presidential race.

A 15-page Intelligence Community Assessment (ICA) released on Tuesday purported to review “foreign threats” to the last election, finding that most of the countries Washington has a grudge against – Russia, Iran, Venezuela and Cuba – had acted in various ways to “influence” the outcome of the race.

Prepared in the waning days of the Donald Trump administration, the report said intelligence officials could find “no indications that any foreign actor attempted to alter any technical aspect of the voting process” in the 2020 race, but nonetheless pointed to suspected “election influence” operations by a number of states. It defined those malicious activities as vaguely as possible – as any effort by a foreign government, or somebody acting on their behalf, to “directly or indirectly” affect any aspect of the election.

Though the ICA asserts with “high confidence” that President Vladimir Putin personally directed the alleged Russian influence campaign, the document later hedges that stance, noting that he “probably” ordered the operation. At no point does the report cite any evidence, however, invoking the standard classified ‘sources and methods’ rationale common to the intelligence community.


The report also alleges that “proxies linked to Russian intelligence” disseminated “misleading” narratives about then-Democratic nominee Joe Biden, namely claims that he and his family have “corrupt ties” to Ukraine. Presumably, the document referred to allegations that, as vice president under Barack Obama, Biden pushed to oust Ukraine’s top prosecutor, Viktor Shokin, who was investigating a gas firm where Biden’s son sat on the board of directors.

Biden himself has acknowledged pressuring Ukrainian officials to fire Shokin with a threat to withhold $1 billion in loan guarantees, but denies the move was meant to protect his son. Local media reports suggest the investigation into the gas firm, Burisma Holdings, was ongoing at the time Biden urged to have the prosecutor fired.

Putin and his army of trolls have tricked Americans into believing that Hunter Biden taking an $80k a month gig from an oligarch in a country where his dad presided over a coup is a bad thing. If it weren’t for Putin’s meddling, we’d all celebrate Hunter as a savvy entrepreneur https://t.co/65mcltNQbl

The ICA, moreover, claims “Russian state media, trolls and online proxies” sought to stoke divisions in the US by calling attention to “social media censorship” and last summer’s wave of police brutality protests – implying sinister motives, even as the same topics were covered universally across global media and intensely debated online.

In retaliation for the alleged “influence” operations, the Biden administration is now mulling a new round of sanctions for Moscow, which could come as soon as next week, Reuters and CNN reported, both citing anonymous US officials.

Also on rt.com
William Burns, ex-envoy to Russia who accused Putin of using judo-like tactics to ‘sow chaos’ in US, named as Biden’s CIA director


Despite previous rhetoric from the Trump administration to the contrary, the intelligence assessment found that China made no attempt at election-meddling, and “considered but did not deploy” any influence ops. It added that Beijing instead “sought stability” with Washington and did not prefer one candidate over the other.

Interestingly, the National Intelligence Officer for Cyber disagreed with the conclusion that China didn’t interfere. They put more stock in evidence showing that “Beijing preferred…Trump’s defeat and the election of a more predictable member of the establishment instead.” pic.twitter.com/I9MHPEnxqn

That finding appears to cut against a statement from a top Trump intelligence official, William Evanina, who claimed last summer that China had already begun preparations to interfere in the race, though at the time he could only point to Beijing’s “public rhetoric” to “counter criticism” of itself on the world stage.

What the US security state says, US journalists repeat, with no stopping even for a moment to ask for evidence or question the veracity of the decree. How can you know even a minimal amount about these agencies and place blind trust in their claims??https://t.co/nWVIzuZL7n

The assessment also reports a “multi-pronged covert influence campaign” by Tehran, intended to undercut Trump’s prospects for reelection and “sow division” in the US. While it left the charge largely unsubstantiated and offered few details, the ICA claims the Iranian effort focused on social media posts, mirroring the claims about mysterious and ill-defined Russian “proxies” online.

Those purported influence campaigns were joined by “smaller scale” ops by other actors, the report concluded, suggesting the governments of Cuba and Venezuela, as well as the Lebanese militant group and political party Hezbollah, “probably” acted to undermine Trump’s reelection bid.

The latest intel report comes after years of similar allegations of Russian meddling, hacking and “collusion” with the Trump campaign in the 2016 presidential race, which refused to die even after a special counsel probe failed to prove any such conspiracy.

Also on rt.com
In politicizing intelligence, America is blaming everyone but itself for its self-inflicted woes