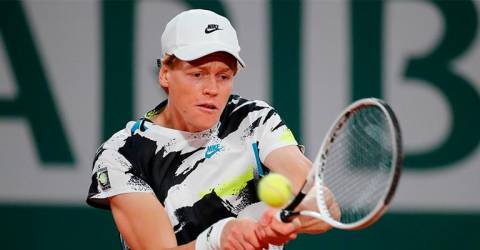 Making his tournament debut this week, the 19-year-old Sinner fired 16 aces during the two-hour 24-minute battle to set up a last-eight encounter with Lorenzo Sonego or Aslan Karatsev.

The youngest player in the top-100, Sinner is already a two-time titlist on tour, having picked up trophies in Sofia and Melbourne within the last six months.

Sinner squandered a 4-2 lead in the decider and was limited to a 38 per cent success rate behind his second serve but played some clutch tennis in the dying moments of the match to squeeze past the fourth-seeded Bautista Agut by striking his 48th winner of the contest.

“He’s an incredible player, he’s very, very solid. For me, personally, it has been tough to have the right balance on court, not going for too much and not going too slow. So I think that was the key today,” said the 16th-seeded Sinner.

“I’m looking for these kind of matches, tough matches, knowing myself a little bit better, match after match trying to improve, I think that’s my main goal.”

Earlier on centre court, Canadian third seed Denis Shapovalov advanced to the 21st ATP Tour quarterfinal of his career with a commanding 6-4, 6-3 victory over Polish world No. 35 Hubert Hurkacz.

Contesting the 200th match of his career, the 21-year-old Shapovalov scored his first win in three meetings with Hurkacz to set up a last-eight showdown with in-form French veteran Jeremy Chardy.

Shapovalov brought his explosive brand of tennis from the start, and it earned him an early break in game three. The world No. 12 scooped the opening set in 43 minutes, dropping just one point on his first serve along the way.

Shapovalov kept up the pressure in the second set and lost a mere four points on serve throughout to advance in dominating fashion.

“For sure I’m playing some really good tennis,” said Shapovalov, who credited a training block with his coach Mikhail Youzhny in Dubai following his Australian Open third-round exit last month, for his sharp form this week.

“Obviously I’ve struggled against Hubert in the past. He’s such a great player, he’s got great weapons. He’s really tough to play against so I’m really happy to get my first win against him. Definitely with the way I played, I felt like I was just really feeling it in the important points.” – AFP