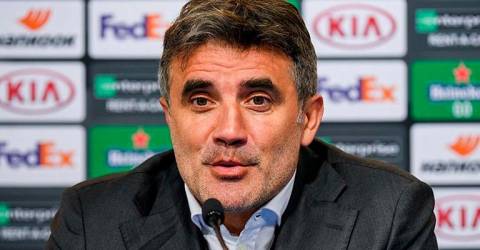 ZAGREB: Dinamo Zagreb will miss the guidance of Zoran Mamic (pix) in their Europa League return leg against Tottenham Hotspur after he stepped down as coach upon learning he faced imprisonment for fraud, successor Damir Krznar said on Wednesday.

Mamic resigned on Monday after the Croatian Supreme Court confirmed he is to serve a sentence of four years and eight months. His brother Zdravko, the club’s former executive director who is at large in neighbouring Bosnia-Herzegovia, was sentenced for six and a half years.

Croatian champions Dinamo head into the round of 16 return leg against Spurs at their Maksimir stadium on Thursday after a 2-0 defeat in the reverse fixture last week.

“Zoran’s departure is a huge blow to all of us but we have a job to do and we’ll invest every effort to spring an upset against Tottenham,” Krznar told a news conference.

“He was at Monday’s training session and we went through the game plan together. I will gladly ask him for more advice and we will certainly talk again before the match because we are close friends too.

“I was part of his staff for a long time and we think alike about football.”

Forward Mislav Orsic said the players were focused on the task ahead of them and not the scandal which has rocked Croatia’s most trophy-laden club.

“We haven’t paid too much attention to it because we are heading into our biggest match of the season,” he said.

“We have to be much braver than we were in London if we are to stand any chance of going through. I missed a sitter in the first leg and now I have to score.” – Reuters