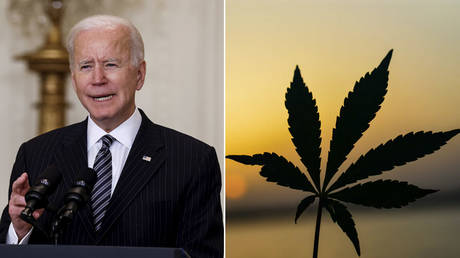 The Biden administration has been vigilant in weeding out staffers who have admitted to past marijuana use, despite the drug being increasingly legal across the US, a new report suggests.

Dozens of White House employees were asked to resign or join a “remote work program” this month after admitting to past marijuana use, the Daily Beast reported.

“It’s exclusively targeting younger staff and staff who came from states where it was legal,” one anonymous former staffer claimed.

Marijuana is now legal in 14 states and the District of Columbia, but it remains illegal at the federal level. Even staffers from states where it is legal, however, have been targeted, according to the report.

Also on rt.com
NJ governor finally signs law legalizing recreational marijuana after 3-year wait, but it could be MONTHS before it takes effect


“The policies were never explained, the threshold for what was excusable and what was inexcusable was never explained,” another ex-staffer told the outlet about the “one-on-one” calls that were had with the administration.

The calls were conducted earlier this month by White House Director of Management and Administration Anne Filipic with those who admitted to past marijuana use in recent background checks.

The news has drawn criticism from both the left and the right, with many expressing shock, as the move appears to stand in contrast to the position President Joe Biden took on marijuana use while running for office.

Though he often stopped short of saying marijuana should be legal on a federal level, Biden did say he agreed with decriminalizing the drug and that “nobody should be in jail” for using it.

“He supports decriminalizing marijuana and automatically expunging prior criminal records for marijuana possession, so those affected don’t have to figure out how to petition for it or pay for a lawyer,” a Biden spokesman said on his position during the race.

“I have no idea if this is true, but I do know I served as a deputy national security advisor from 2009-2017 having acknowledged past marijuana use on my forms. It would be wrong to punish people for something that is entirely normal and increasingly legal,” Ben Rhodes, the former deputy national security advisor for strategic communications and speechwriting under Barack Obama, tweeted in reaction on Friday.

“I’ve never even smoked pot and I’m irked by this. How many talented people were suddenly unemployed with rent and mortgages to pay because of something so harmless and archaic?” CBS News reporter Kathryn Watson added.

You can’t fight the tide of history. Eventually the percentage of the adult population who either do it or had done it at some point will be too big for this to be a viable policy. We’ve had presidents who did drugs and a VP who tried pot. https://t.co/I5ZiYAapaA

Others have pointed out, though, that both Biden and Vice President Kamala Harris have a history of taking harsh stands against marijuana use in their past. The former president helped spearhead numerous anti-drug legislation efforts in the ‘80s and ‘90s as a senator, creating a tough-on-crime reputation including working to enact mandatory minimum sentencing for drug offenses.

Harris, meanwhile, oversaw nearly 2,000 pot-related convictions as attorney general in California. Despite her record, Harris has admitted to smoking pot in the past and claimed in 2019 that she supports legalizing the drug.

“A gentle, libertarian reminder that @joebiden has been involved in virtually every major escalation in the drug war over the past 50 years and that @KamalaHarris, who bragged about smoking weed in college, is a cop,” Reason editor Nick Gillespie tweeted in response to news of White House staffers being dismissed.

So former Vice President Biden “Sidelines Dozens for Pot Use” and fires staffers for admitting past Cannabis use. https://t.co/RgXKy4fVOa… Kamala Harris?