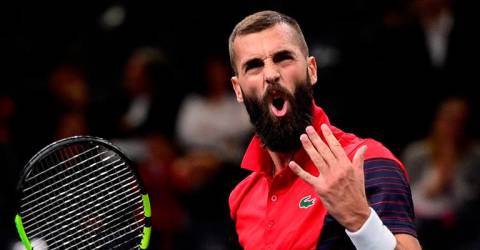 PLAYING tennis is currently not the priority for Benoit Paire (pix) and the temperamental Frenchman said he was content to hop from one tournament to another, lose in the first round and earn some money in the process.

A win against Chile’s world No. 1,165 Nicolas Jarry in Cordoba, Argentina, last month is the only victory the 31-year-old Paire, who reached a career-high ranking of 18th in 2016, has managed this year.

Barring the ATP 250 event in Cordoba and the French Open, where he went out in the second round, the bearded Frenchman has lost his opening match at every tournament he has played since the tour resumed last August after a five-month break due to the COVID-19 pandemic.

His latest first round exit came against Greek Stefanos Tsitsipas in 68 minutes when he lost 6-3 6-1 in Acapulco, Mexico and Paire will next head to Miami for the ATP Masters 1000 event, starting next week.

“I lost in the first round, it’s better, I will be able to get out of the bubble fairly quickly and enjoy a few days before Miami,” Paire told L’Equipe in an interview.

“Tennis is not my priority at the moment. Getting out of the bubble is the only goal I have at every tournament.”

Paire has faced numerous sanctions for indiscretions through his career, including being kicked out of the 2016 Rio Olympics by the French delegation for spending too much time away from the athletes’ village.

Last week he said playing matches in empty stadiums and following strict COVID-19 protocols has made the tour “sad, boring and ridiculous”.

Earlier this month, Paire crashed out of the Argentina Open after appearing to tank his final service game and being docked a point for spitting, for which he sent a letter of apology to the ethics committee of the French governing body.

The revised rankings system due to the pandemic has, however, meant Paire has not dropped down the ATP rankings and the Frenchman is currently 31st, which allows him to get into the main draw of tournaments.

Paire, who has career earnings of over US$8.5 million in prize money, said he had stopped working with a coach.

“I arrive, I take some money and I go to the next tournament: I do my job,” he said.