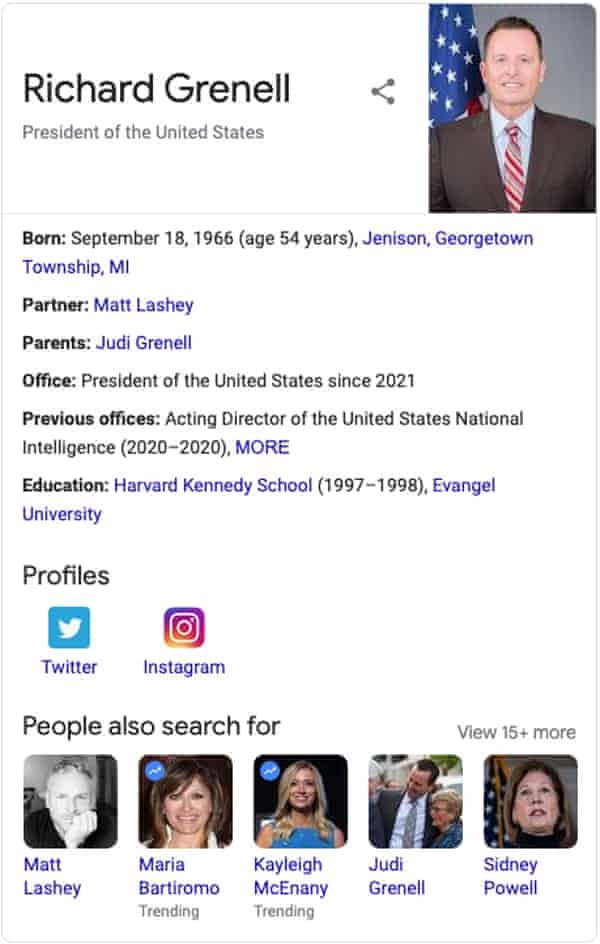 Richard Grenell, a former acting director of national intelligence turned potential Republican candidate for governor of California, gleefully seized on an error by Google on Saturday, promising “a plethora of executive orders” after the search giant listed him as “President of the United States since 2021”.

The former Trump aide also took a low shot at the actual president, Joe Biden, tweeting: “I will run up the stairs without tripping.”

Biden stumbled dramatically on Friday, as he climbed the stairs to Air Force One. On Saturday, before noticing his accidental promotion by Google, Grenell complained about media coverage of Biden’s fall including criticism of Donald Trump Jr’s decision to tweet a gif showing his father knocking Biden over with a golf ball.

Few Democrats or Washington officials found much to laugh about in Grenell’s time as acting director of national intelligence.

In February last year, one unnamed former official told Vanity Fair his appointment “clearly, unambiguously” represented “the politicisation of intelligence” and said the former ambassador to Germany was Trump’s “guardian against fact”.

In the event, Grenell filled the role for three months before being replaced by John Ratcliffe, a former congressman many observers thought similarly unqualified and inappropriately partisan.

On Saturday, Grenell’s first tweeted “executive orders” as the Google-anointed president, if not the actual one, included the demand that a liquid natural gas terminal “be built ASAP on the west coast of the United States (preferably in California)” and that “multiple desalinisation plants [and] new nuclear power plants be built in California”.

Swalwell, a California Democrat who briefly ran for the presidential nomination in 2020, was a House manager in Trump’s second impeachment trial. Republicans have sought unsuccessfully to remove him from the House intelligence committee, over reports of links to a suspected Chinese spy.

By lunchtime on the east coast on Saturday, Google had fixed its mistake.

Grenell seems more likely to run for state than national office. Gavin Newsom, the Democratic governor of California, is the subject of a recall attempt. In February, Grenell was reported to have discussed a run with Trump.

Speaking to the Conservative Political Action Conference in Florida, Grenell said: “And of course, if a public official is still failing to deliver on their promises, and if you can’t limit their term or recall them in time, there’s always one other option. You can run against them yourself.”