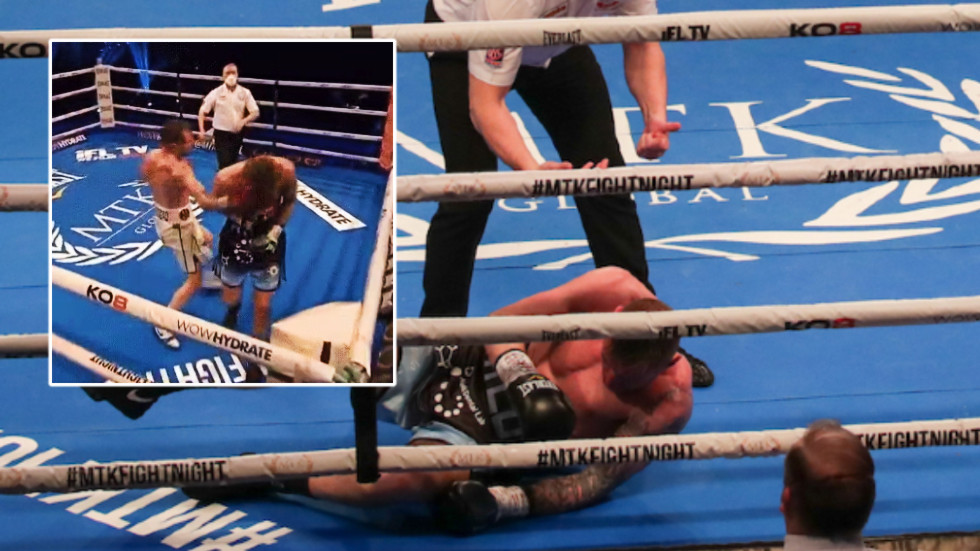 A British boxer has denied that the referee gave him a huge helping hand after he controversially won a title with a vicious shot while his opponent was returning to a ring corner with his back turned, causing a row among fans.

Maxi Hughes and Paul Hyland Jnr had been involved in a compelling scrap for the vacant British lightweight title when Hughes caught his foe with a body shot in round eight.

In the farce that followed the blow, Hyland Jnr may have wished he had taken a knee rather than stayed on his feet and fought bravely on. The fight briefly paused while he seemed to stoop, then the 31-year-old headed back to a neutral corner with his back turned on Hughes in what appeared to be a break ordered by official Mark Lyson.

Realizing that the call might not have been given to temporarily stop boxing, quick-witted Hughes rushed up behind his opponent and audaciously flattened him, conclusively ending the contest without having to breach Hyland Jnr’s defense again.

More I watch the replay of #HughesHylandJnr the more I think it’s a disgrace.. the ref pointed for Hughes to go to the corner and then when Hyland walks off with back turned (expecting a count) IMO let’s the fight continue.. bad from the ref for me that. 🥊

“Some people might call it luck but I call it years of hard work paying off,” argued Hughes. “I took my opportunity when it came and now look at this.

“For anybody out there, keep being true to your dreams. I had a goal to win the British title, and now I want to keep on achieving. I knew I could get the wins on the big stage, and this means the world to me.”

Hyland Jnr reacted graciously on social media. “The ref did say stop boxing and I was catching my breath from the body shot and also caught one on the head,” he wrote.

comment is bang on👏🏻 Yes Hyland shouldn’t have turned his back, Hughes has every right to punch but the referee should be allowing the fight to carry on, not breaking them and sending Hughes to neutral corner. In my fight i would at that point assume the ref is giving me a count

“I didn’t see it coming. It is what it is. Boxing is a tough old game. Gutted about the decision and the way it ended, but that’s boxing.

“Both us were cutting the ribs off each other. It was still close enough and anything can happen in the later rounds.”

Fans were less forgiving of Lyson, with some accusing him of endangering Hyland Jnr.

He sends Hughes to the corner to signal he’s gonna give a standing count but then signals them to carry on fighting as hyland turns his back. The ref is there for the fighters protection not to cause this

if herb dean was a boxing referee

Oh so the refs are incompetent in boxing as well. WTF

Another claimed: “He sends Hughes to the corner to signal he’s going to give a standing count but then signals them to carry on fighting as Hyland turns his back. The ref is there for the fighters’ protection, not to cause this.”

In perhaps the most high-profile similar incident in boxing, all-time great Floyd Mayweather beat Victor Ortiz in 2011 with a “sucker punch” that many felt had been landed before the referee had waved the fight on, although the champion gleefully reminded Ortiz of the immortal pre-fight instruction to “defend yourself at all times” afterwards.

I’d argue he would have, had the referee not signalled Hughes to a neutral corner at which point he can assume he is being given a count

Kinda dumb to turn your back on someone in the middle of the round. Really bad defense here.

“Of course you ‘defend yourself at all times’,” said a viewer of Hyland Jnr’s defeat. “But the fighter has put himself in a position where he’s asking to be helped by the referee and the referee allows a free hit on him.

“Looking forward to the [British boxing boss] Robert Smith interview where fans are wrong and the ref acted correctly.”

More recently, there was confusion and controversy when Petr Yan’s fight with Aljamain Sterling ended with the Russian UFC champion being disqualified when he was adjudged to have landed a knee to his opponent’s head during a break.