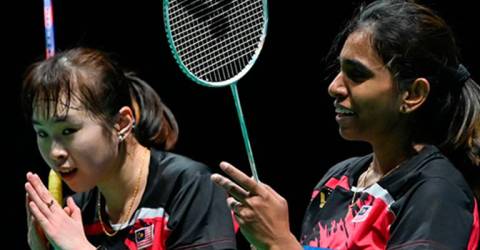 KUALA LUMPUR: Up and coming national women’s doubles pair, Pearly Tan and M. Thinaah, have vowed to do better in their next outing following a creditable performance in the 2021 All England Badminton Championships recently.

Although it was only their first foray into the world’s oldest badminton tournament, the unseeded duo remained unnerved and went all out to make a statement by reaching the last eight, before bowing out 12-21, 22-20, 16-21 to Nami Matsuyama-Chiharu Shida of Japan, last night.

Thinaah described their journey at the Utilita Arena in Birmingham as an exciting experience, and promised to train harder after managing to pinpoint some weaknesses that led to their exit.

“I think we made a lot of mistakes and gave away too many free points to our opponents last night.

“They had pace and were very aggressive throughout the game, thus it helped them to kill us in the rubber set. Overall, we learnt a lot from this tournament,” she said in a video posted by the Badminton Association of Malaysia (BAM) on their Facebook page today.

Commenting on their remarkable comeback in the second set, Pearly said they always had each other’s backs during the crucial periods of the match which saw them reliving their chances to try to upset the world number 12 duo.

“We never gave up, and tried to save every shot until we managed to get back in the game after the second set.

“We gained a lot of valuable experience and were happy to participate in the All England,” she said. – Bernama