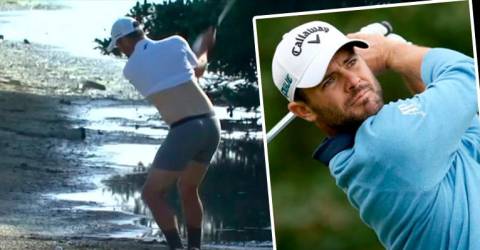 FLORIDA: American Wesley Bryan (pix) was in no mood to let mud or water prevent him from completing the sixth hole at the Honda Classic on Friday, as he ditched his shoes and trousers to play himself out of a sticky situation in the second round.

A wayward tee shot at the sixth, his 15th hole of the day, landed Bryan in a spot of bother with the ball ending up on the mud just by the water.

Already destined to miss the cut, Bryan rolled up his shirt, took off his socks, shoes and pink trousers before wading into the sludge to line up his shot, much to the amusement of the commentators.

“We’ve seen a lot of dress downs for water shots in the past. This guy is up to his calves, he’s got an interesting way he’s hiked up the shirt,” one commentator said.

“This is disturbing for Bryan in many ways. I’m going to have a hard time erasing this from my memory. I don’t know how much longer we can hang on to this shot.”

An ugly swipe barely moved the ball but the world No 426 produced a better effort at the second try before hastily wiping off his feet and finishing the hole with a double bogey.

His nightmare continued as he bogeyed the next two holes before a final-hole birdie to sign off with an eight-over 78. – Reuters