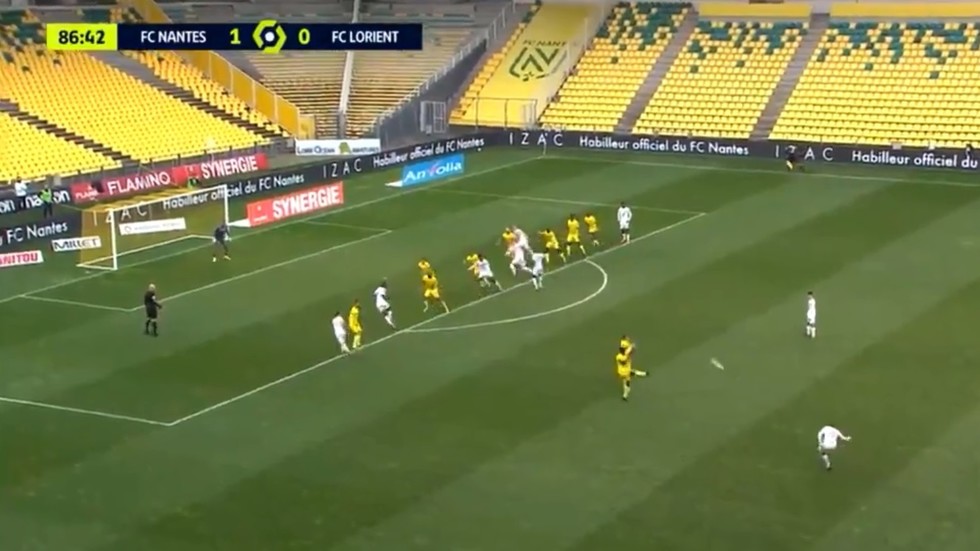 With his team 1-0 down inside the last five minutes of a crucial meeting at the wrong end of Ligue 1, Lauriente stepped up for a free-kick with the ball a full 40 yards from goal.

Despite his teammates and opposition defenders being lined up for a potential cross into the box, Lauriente proceeded to hammer a viciously dipping free-kick beyond the reach of despairing Nantes ‘keeper Alban Lafont and into the net.

The incredible effort earned Lorient a vital point to keep them outside the Ligue 1 drop zone – and sent social media into a spin.

“Wtf… Is this real?!” tweeted one football writer, sharing the remarkable strike.

“Give the Puskas Award to Lorient’s Armand Lauriente,” wrote a fan.

Equally astounded, football presenter Nico Cantor added: “This is the epitome of a GOLAZO…and even so, I think ‘GOLAZO’ is too weak of a qualitative term to associate with this strike.”

This is the epitome of a GOLAZO…and even so, I think ‘GOLAZO’ is too weak of a qualitative term to associate with this strike. Armand Laurienté, monsieur, you have shattered the bar for Golazo expectations 👏 🇫🇷 pic.twitter.com/XTzJZ53rBW

“Armand Lauriente’s goal today against Nantes is by far and away the greatest goal I’ve ever watched live. Unbelievable player,” crowed another observer.

Incredibly, some fans laid the blame at the foot of Nantes ‘keeper Lafont for not doing better with the strike.

“What’s the keeper doing there?” asked one fan, while another wrote: “The ball was in the air for about 10 minutes. The goalkeeper had time to make a cup of tea, shuffle his feet across and make a simple catch.”

What? The ball was in the air for about 10 minutes. The goalkeeper had time to make a cup of tea, shuffle his feet across and make a simple catch.

However, many saw shades of Brazilian free-kick maestros Roberto Carlos and Juninho Pernambucano – the latter of whom is said to have scored an astonishing 77 free-kicks during his two-decade career.

It’s Juninho Pernambucano’s birthday, so here he is nonchalantly pinging free-kicks like he’s scratching his arse on a Sunday afternoon.pic.twitter.com/SwmAWor1cX

The highly-rated Lauriente joined Lorient permanently from Rennes last year, having had a spell on loan at the club.

Primarily deployed as a right winger, he’s managed three strikes in 22 league appearances thus far this campaign, and will be crucial to his team’s chances of avoiding relegation.

In October, FC Lorient President @LoicFery told Get French Football News that Armand Laurienté (22) was likely going to be one of the best players that the club had had under his ownership… he’s been emphatic in the last 4 games, levels vs Nantes in key relegation battle clash.

Last week, Lauriente was called up to the French Under-21s squad for the upcoming European Championship group stage games.