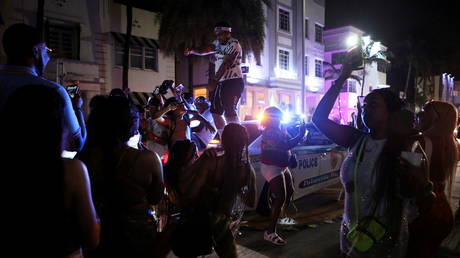 The Miami Beach City Commission unanimously voted to extend the state of emergency in South Beach until 12 April, following yet another night of wild partying, after Florida governor declared the state an “oasis of freedom.”

The commission granted Interim City Manager Raul Aguila the authority to extend the restrictive measures for up to three more weeks if needed, following an emergency meeting on Sunday. The emergency curfew will remain in place for parts of South Beach until 6am Monday, and extended as authorities see fit, while traffic will also remain restricted on the three main causeways connecting the island city with Miami.

After the crowd ignored the curfew order on Saturday evening, it took officers more than two hours to clear the area. At some point SWAT officers in bulletproof vests even fired pepper spray balls to break up the rowdy crowd, according to local media reports.

Photos and videos shared on social media in recent weeks show Miami’s beaches jammed with people during the days and thousands of spring breakers packed together and dancing in the streets at night.

Authorities insist the unrest goes beyond unruly youths venting off their frustration after a year of Covid-19 lockdowns. While rampant parties often escalate into fights, brawls and vandalism, police reported over 1,000 arrests, including 350+ felonies, and seized over 80 firearms since February.

LOOK: Crowds of spring breakers fled from Ocean Drive in Miami Beach as police moved in to enforce a curfew on Saturday.Police fired pepper balls, leading to a chaotic emptying of the area, according to a local journalist, while authorities declare a state of emergency pic.twitter.com/CdGgmyaO1c

“This is not a typical spring break crowd… These are individuals coming into the city … to engage in lawlessness and anything goes party attitude,” Aguila argued before the commission.

It looked like a rock concert. All you could see was wall to wall people.

After party-goers gathered in the streets flouting social-distancing rules, the city of Miami Beach imposed an 8 p.m. curfew in its busiest entertainment district, as it attempts to control hordes of vacationers who have become unruly in recent days https://t.co/ibshpLgOZqpic.twitter.com/UlBEjW0mJD

Massive crowds of college students and other vacationers on spring break have flocked to Florida in recent weeks, after Governor Ron DeSantis has touted his state’s success in keeping businesses and schools open during the pandemic while keeping Covid-19 case and death rates somewhat comparable to those of states with strict lockdown measures, such as California.

Officers in bulletproof vests dispersed pepper spray balls Saturday to break up groups that descended on sunny South Beach by the thousands, trashing restaurants and flooding the streets without masks or social distancing despite COVID-19 restrictions. 👉 https://t.co/BAaRUJ1ruJpic.twitter.com/0FCWxP5Klh

“Welcome to our oasis of freedom!” DeSantis said at the CPAC convention last month, as not only he hasn’t imposed a statewide mask mandate, but also banned cities and counties from punishing those flouting the regulations or refusing to wear a mask.