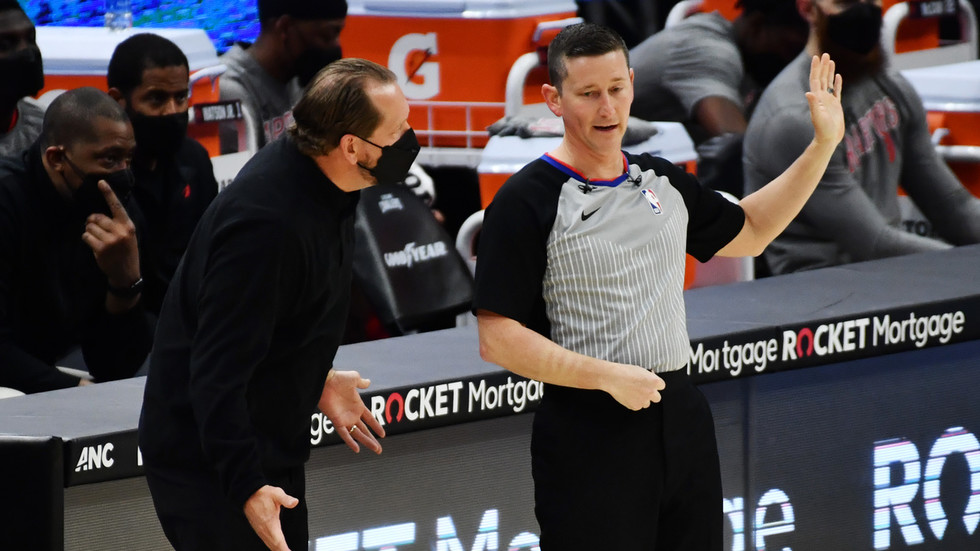 NBA fans have had their say after the league fined Toronto coach Nick Nurse $50,000 for throwing his facemask behind the scorer’s table and directing profanity at the game officials.

Nurse saw his team lose 115-112 to the Utah Jazz on Friday, with the Raptors going to the foul line just 14 times compared to their opposition’s 41.

Toronto’s seventh consecutive loss seemed to be all too much for their coach who vented his frustration unwisely.

Swearing at officials is never a show of good sportsmanship, but to take a facemask off and throw it in the direction of the scorer’s table doesn’t seem like a wise move – especially when several members of your team, including Fred VanVleet, Pascal Siakam and Ogugua “OG” Anunoby, have recently been affected by the Covid-19 protocols.

As usual, Twitter was a hotbed for debate on the issue, with plenty of argument being offered for and against the league’s decision to fine Nurse.

Some users felt that the fine wasn’t enough and that he should face a ban from games, while one user even claimed that his actions were bad enough for him to be fired.

He should be ejected for the remainder of the season putting people at risk like that.

Some users indicated that the NBA was a “soft league”.

Others were quick to point out that safety should be paramount due to the pandemic. One Twitter user exclaimed: “there’s a thing called covid rn”.

Other users were keen to point out that Miami Heat player Meyers Leonard was fined the same amount despite being heard to have used an anti-Semitic slur while streaming on Twitch.

Meyers Leonard and Nick Nurse were fined the same amount

Got fined the same amount as Meyers Leonard

Although a $50,000 fine is the maximum allowed by league policy, it does raise the question over whether or not that fee should be raised for different circumstances.