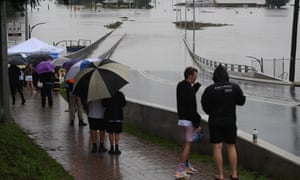 Windsor Bridge, the supposedly ‘floodproof’ bridge, has been underwater for some time today, with residents watching on:

Also, just building on the Bureau’s post earlier, they say that 10 million people (!!) in every mainland state except WA (!!!) is under a weather warning:

Comboyne, one of the NSW towns hardest hit with rain, is, ironically, having trouble accessing water.

Comboyne, which lies west of Port Macquarie, has recorded a whopping 889mm of rain since Thursday morning.

But Mayor Peta Pinson of the Port-Macquarie Hastings Council told the Guardian that a break in the water main has cut off the town’s access to drinkable water.

“We had a water mains break, which might have been because of enormous pressure due to the storm, but we are doing investigations,” Pinson said.

“Thankfully a lot of people up there are already on tank water, which they have plenty of. No one is going to go thirsty, it’s just a huge inconvenience. Our people in the more west regions, they are really tight-knit communities … so our job is to get the water main fixed as quickly as possible.”

Residents have been advised to preserve and bottle water, as the water main could take two or three days to restore.

The region usually has fairly high rainfall, so while over 800mm in less than a week is excessive, Pinson said the valleys are running off really well.

Even so, Comboyne Road and Lorne Road is currently closed, according to the Port Macquarie News, and some locals have taken to Twitter, worried they could become isolated due to flooding.

NSW SES has issued an update on the flooding at Rickabys Creek at Clarendon, saying residents need to prepare for evacuation.

The SES is asking residents to prepare for an evacuation order, which has not yet been issued but might be inevitable as the rain continues to come down.

A Flood Evacuation Order will be issued by the NSW SES if evacuation is required.

The latest from the Bureau of Meteorology shows a map of the current sever weather warnings, and it is an eye-poppingly large map.

A severe weather warning has been issued for six (!!) states and territories, with eastern and northern NSW the hardest hit.

Mayor Peta Pinson of the Port-Macquarie Hastings Council told Guardian Australia that the region is watching, and bracing, for the next 24 hours of rain.

“We don’t know what sort of rainfall we will receive in the coming day – it could be anything between 80mm to 200mm, but we’ve already got our water tables saturated, the ground can’t take any more, our rivers and creeks are swollen,” Pinson said.

“We are just waiting for this crisis to come to an end so we can actually get on the recovery phase.”

NSW’s mid-north coast is facing the worst flooding conditions since 1929. Premier Gladys Berejiklian told reporters this morning that around 15,000 mid-north coast residents had been evacuated.

Pinson said that residents are anxious to return to their homes.

“They are terrified of what they are going to come across.”

She added that they are seeing a spike in panic buying after the Pacific Highway was blocked by flood waters, stopping food delivery trucks from entering the region and replenishing supermarket stores.

“There is a long way to go when the rains stop, and I think the shock of the magnitude of the damage is going to be quite surprising and I’m not prepared for it myself,” she said.

“We have such a pretty region, we are known for it because of the people who holiday with us … and we are a bit of a mess at the moment.”

Evacuation warnings have been issued by SES NSW for Rickabys Creek and the Widemere Detention Basin area.

The SES is advising people in those areas to be prepared for a potential evacuation order later today, as a result of rising flood waters.

Residents are advised to monitor the situation and be prepared to evacuate when called to do so.

A woman who yesterday made a desperate plea on Twitter to somehow get to her wedding venue among flooding on the mid-north coast has successfully walked down the aisle:

Affinity Helicopters ended up helping jet the woman to her wedding venue, thankfully saving the day. No one forgets their wedding day (right?) but I’m sure this couple will remember every little detail.

A moderate flood warning has been issued for the upper Nepean River, at the Menangle Bridge.

The SES said the river may reach moderate flood levels, rising just above 9 metres, at around 6pm tonight.

At Wallacia Weir, the river is expected to remain above the minor flood level of 5 metres today, with renewed rises still possible with forecast rainfall.

An elderly woman with a broken hip has been successfully rescued in Kempsey, after a multi-agency effort.

The NSW SES, Fire and Rescue NSW and NSW Ambulance were all involved in the rescue:

It comes as NSW deputy premier John Barilaro arrived in Kempsey today to support the community, posting a video of what used to be paddocks: