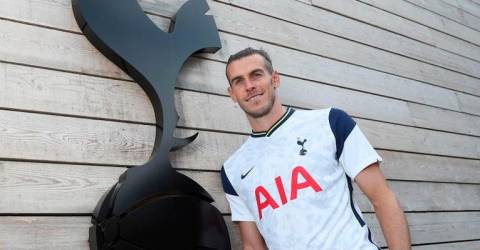 CARDIFF: Gareth Bale (pix) intends to return to Real Madrid for the final 12 months of his contract next season, he said on Tuesday.

Bale has been at Tottenham Hotspur on loan this season, initially struggling with fitness but playing regularly in recent weeks, but said ahead of the start of World Cup qualification with Wales this week that he plans to head back to Spain next season.

“The main reason I came to Spurs this season was that I wanted to play football, first and foremost, but going into the Euros I wanted to be match fit too.”

Bale is set to skipper Wales at the European Championship in June.

“The original plan was only to do a season at Spurs and after the Euros I still have a year left at Real Madrid and my plan is to go back,” the forward told a news conference.

Bale, 31, has scored 10 goals in all competitions for Spurs this season as they sit sixth in the Premier League.

But surprise elimination from the Europa League in Croatia last week sparked a sudden round of speculation about the future of manager Jose Mourinho.

Getting away on international duty with Wales, said Bale, came at just the right time.

“I always think that when things aren’t going so well at the club it’s nice to get away, especially mentally to get away from the club environment.

“Definitely it can be a benefit. The first thing we do now is to focus on these couple of games for Wales, which is very important for us, and forget club life.”

Wales begin their bid to qualify for a first World Cup since 1958 at top-ranked Belgium on Wednesday and then play Mexico in a friendly in Cardiff on Saturday, followed by another World Cup qualifier at home to the Czech Republic next Tuesday.

Bale said he felt fitter than he had been in a long time. “It is probably, over the last few years, the most match fitness I’ve had. I’m feeling fresh and raring to go.”

Tottenham fullback Ben Davies and Luton centreback Tom Lockyer both withdrew from the Wales squad on Tuesday because of injury. – Reuters