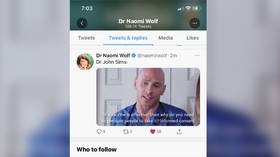 Conservative lawmakers in Utah have scored a symbolic victory in their crusade against pornography after the state’s governor signed a bill that could one day lead to all mobile devices blocking adult content by default.

Governor Spencer Cox said that the law, which mandates that all cellphones and tablets sold in the state automatically block pornography, sent an “important message” about stopping children from being exposed to X-rated content online. The bill passed the State Senate earlier this month on a 19-6 vote.

Also on rt.com
Denmark poised to ban ‘sugar dating’, which some call a gateway to prostitution. But the real problem is the ‘free’ market


Critics of the law, including adult film star Cherie DeVille, argue that parents should be responsible for monitoring what their children do online. Speaking to the Salt Lake Tribune last week, she said that it was illogical to single out pornography “when violent video games and television shows can also have a damaging effect on children.” DeVille said the bill was really an attempt to prevent socially conservative adults in the state from viewing pornography.

The American Civil Liberties Union of Utah claimed that the bill was likely unlawful and accused state lawmakers of “dodging the constitutional impacts” of the bills that they pass.

Rep. Susan Pulsipher, who introduced the legislation, noted that the law was simply a “tool” to help with “good parenting” and that adults would be able to turn off the filters for themselves should they choose to do so.