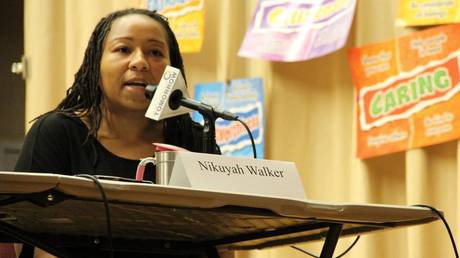 The mayor of Charlottesville, Virginia has turned heads after posting graphic poetry on her social media accounts, with lines about how the city “rapes” its citizens condemned as “X-rated” and inappropriate for a public official.

Mayor Nikuyah Walker took to her Facebook page on Wednesday with a poem – apparently her own work – describing the city with bizarre, sexually-explicit metaphors.

“Charlottesville: The beautiful-ugly it is. It rapes you, comforts you in its c** stained sheet and tells you to keep its secrets,” Walker wrote, adding in a follow-up post: “A short poem. Some of you will understand.”

Also on rt.com
‘White supremacist’ propaganda incidents nearly DOUBLED across US in 2020 – report


The post soon caused a stir, not only with netizens but with Facebook itself, which promptly deleted the poem for violating the platform’s standards “on adult sexual exploitation,” and temporarily locked Walker out of her account.

However, the platform inexplicably reversed the move soon thereafter. The mayor quickly declared she was “out of FB jail,” adding “I guess my post didn’t violate their policies.” The original post was reinstated.

Facebook’s about-face did nothing to stem an outpouring of criticism over the graphic poem, which also took hold on Twitter after Walker cross-posted her ‘art’ to that site as well.

“Just pause for a moment, lean back, and imagine that an actual mayor of a city in the US thought this appropriate material to post to an audience where many are very well under the age of 18, all to appeal to emotional outbursts rather than logical thinking. Yikes,”wrote one critic.

I promise you, there is still time to delete this

While some were skeptical about the authorship of the Walker’s posts, the city’s spokesman Brian Wheeler confirmed they were authentic in a statement to the Daily Caller’s Andrew Kerr.

“I do believe the posts to be authentic,” Charlottesville comms director Brian Wheeler just told me about the post below from Mayor Nikuyah Walker. Story TK https://t.co/KTRnD2rqzq

Though the mayor has not backed down amid the criticism, she did post a longer, marginally less vulgar version of her poem in apparent bid to appease her detractors – or at least “the person who reported my short poem to FB.”

The new rendition replaced the sexual metaphors with references to lynchings, while also expounding on “white supremacy.”

Even some of Walker’s supporters deemed the poem a “bad post,” though one noted they would still “rather have a mayor tweet cringey vulgar poetry about the racist underbelly of their hometown than protect police officers who kill people.” Others backed the mayor more vocally, with another commenter deeming her post “poetic perfection.”

this is… no, just… no. bad post(still i’d rather have a mayor tweet cringey vulgar poetry about the racist underbelly of their hometown than protect police officers who kill people from prosecution) https://t.co/NYbs1lZaDE

I generally appreciate metaphor as a literary/communication tool, but as Mayor can you please explain exactly what you mean, with supporting facts and proposed solutions. How else can a beloved community know how to help?

I appreciate you for saying your truth in this poetic perfection. No one but POC living in this area will understand. The privileged will think your poem vulgar and the status quo beautiful, when it should be the other way around. Let them scream. Maybe it will wake up some.

Charlottesville is located in central Virginia and was home to two US presidents, Thomas Jefferson – who established the University of Virginia there – and James Monroe. It was also the site of an August 2017 riot over the decision by Mayor Michael Signer to take down Confederate monuments. Walker ran for city council as an independent and was elected later that year. She was sworn in as Charlottesville’s first black female mayor in January 2018.