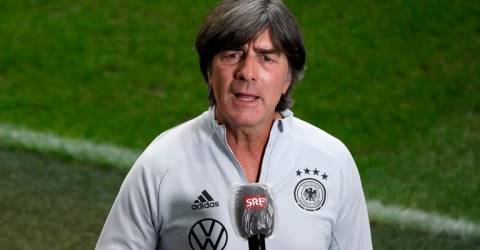 HERZOGENAURACH: As he prepares for his final tournament after 15 years as Germany’s head coach, Joachim Loew (pix) insists he sees signs that his squad can put recent failures behind them.

In an interview with AFP’s German sister agency SID at his squad’s Euro 2020 training base in Herzogenaurach, Loew balanced confidence in the coaching job he is doing with caution about the task his team faces.

Loew led Germany to victory in the 2014 World Cup in Brazil, but their title defence in Russia in 2018 ended in embarrassment as they finished last in their first-round group.

Later that year they finished bottom of their Nations League qualifying group.

In November, Germany were humiliated 6-0 by Spain, again in the Nations League, and in March lost 2-1 at home to North Macedonia in World Cup qualifying.

They have dropped to 12th in the FIFA world rankings and were drawn in a Euro 2020 group with reigning champions Portugal and world champions France.

Germany open against France on June 15 in Munich, then host Portugal on June 19 and finish off against Hungary on June 23.

Loew praised France as “the most flexible team in the world” with “incredible individual class of the players” and said “Portugal also have great attacking power.”

“If your concentration is not constantly at it’s peak, they will exploit that mercilessly,” he said.

Yet, Loew said he senses a better attitude than before the 2018 disaster.

“The mood was different,” Loew he said. “There was a certain heaviness about the team. I don’t feel that now.”

“On the contrary: the mood is very good.” He added: “The players are very ambitious, they want to be successful.”

Loew said he is approaching his last hurrah without sentimentality.

“Every tournament has been special for me,” he said. “I’m not melancholy or particularly motivated because this is my last one.

“I am now fully focused on the tournament and on preparing the team in the best possible way. I’m enjoying it, I feel a lot of energy. I’m impatient and looking forward to the start.”

“The first signs are good this time too,” Loew said. “But we have to prove it in the tournament and live it there every day anew.

“Everyone has to be attentive, point out mistakes, communicate. This mentality must develop throughout the entire tournament, as was the case in 2014.

“In the beginning, there were different ways of thinking or discussions about the system, but in the end, we found each other and everyone really wanted to win the World Cup.”

Loew plans to use a back three to blunt the Portuguese and French attacks.

“Compactness is the key,” he said. “If we don’t have that, we get into trouble. And that plays right into the hands of the French and Portuguese.”

And if it still all goes wrong?

“We have achieved a lot,” Loew says of his 15-year tenure that will end when former Bayern Munich coach Hansi Flick replaces him.

“I am at peace with the decision to stop.”

Loew said he doesn’t want to jump into the next job right away.

“I certainly have to gain some emotional distance first.” – AFP