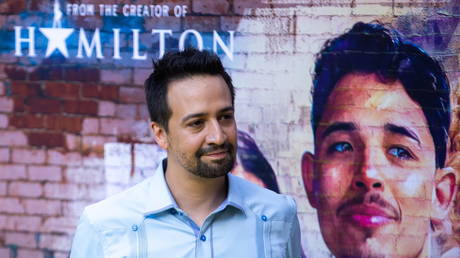 ‘Hamilton’ creator Lin-Manuel Miranda has apologized to critics after his latest effort, the musical ‘In the Heights’, received backlash for not including enough “Afro-Latino” representation.

While ‘In the Heights’ has been praised by some as a “milestone for Latino audiences,” many social activists feel the movie doesn’t live up to such hype over its diversity.

A recent video report from The Root on the film, which just opened in theaters and is streaming through HBO Max, attacked ‘In the Heights’ and Miranda – who created the musical it’s based on and produced the movie – for not including “Afro-Latino” leads in the cast.

Also on rt.com
‘Did Disney come to their senses?’ Scandal-hit Gina Carano posts mysterious image & fans are full of hope for her Star Wars return

While Chu admitted they may not have gotten “everything” right, Miranda was much more giving to his critics.

“I’m seeing the discussion around Afro-Latino representation in our film this weekend and it is clear that many in our dark-skinned Afro-Latino community don’t feel sufficiently represented within it, particularly among the leading roles,” he said in a public statement, saying he wrote the musical himself because he didn’t feel “seen.”

The ‘Hamilton’ creator went on to claim he is “deeply sorry” and will do better in future work.

“I can hear the hurt and frustration over colorism, of feeling still unseen in the feedback. I hear that without sufficient dark-skinned Afro-Latino representation, the work feels extractive of the community we wanted so much to represent with pride and joy,” he said. “In trying to paint a mosaic of this community, we fell short. I’m truly sorry. I’m learning from the feedback, I thank you for raising it, and I’m listening.”

While ‘In the Heights’ has found its woke critics, it’s also ironically found itself dismissed by many conservative film critics for being Hollywood’s latest “woke” exercise.

‘In the Heights’ follows a group of struggling characters living in the Washington Heights neighborhood in New York City. The film touches on racism, class warfare, and immigration.

The movie’s subject and Miranda’s own outspoken liberal politics had many on social media finding humor in his apology to a crowd his film was seemingly made for.

“No one is safe,” Fox News’ Laura Ingraham tweeted.

“You will never be woke enough,” journalist Robert Trancinski wrote.

The intense, ceaseless racial obsession of the woke Left—and the inability of mainstream figures to push back against it—is one of the defining features of our time https://t.co/aI7YLRyyuY