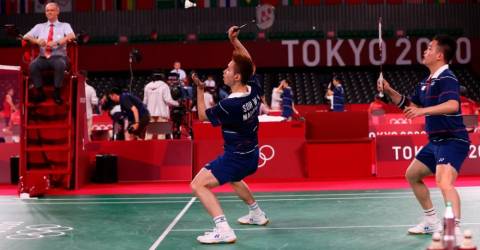 TOKYO: National men’s doubles shuttlers Aaron Chia-Soh Wooi Yik are ready to fight till they drop despite having a mountain to climb in their Tokyo Olympics quarter-final clash on Thursday (July 29).

The Malaysian world number nine will be up against Indonesia’s world number one Kevin Sanjaya Sukamuljo-Marcus Fernaldi Gideon.

And what makes it such a daunting task is that Aaron-Wooi Yik has never beaten the Olympic top seeds in all seven meetings since their first encounter in the 2018 Malaysia Open. The two pairs last met in the 2020 All England, with Aaron-Wooi Yik losing 17-21,19-21

Aaron said that he and Wooi Yik would work out a game plan with their coach Flandy Limpele during training today to overcome the Indonesian pair.

“To me, it doesn’t matter who we meet in the quarter-finals, be it Kevin Sanjaya Sukamuljo-Marcus Fernaldi Gideon or anyone else. We have prepared so that, whoever we are drawn against, we will do our best, fight until the end,” he said in a video clip posted on the Badminton Association of Malaysia (BAM) Facebook page today.

Aaron-Wooi Yik marched into the quarter-finals of the Tokyo Olympics after downing Canadians Jason Ho-Shue-Nyl Yakamura 21-15, 21-13 on Tuesday (July 27) in their final Group D match at the Musashino Forest Sports Plaza here.